After A Rollercoaster Offseason, Baker Mayfield Is Expected To Be Named The Panthers’ Starting QB 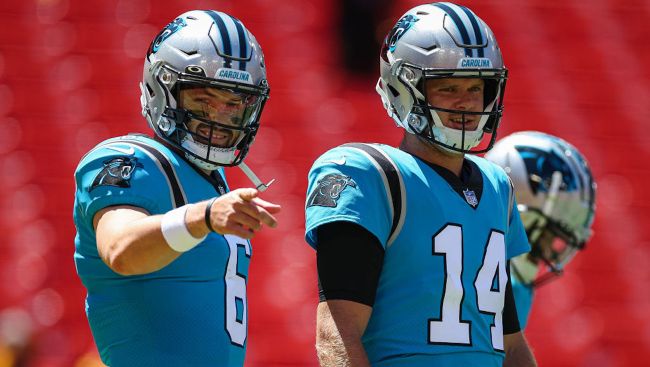 After a tumultuous fall from grace that saw him go from the savior of the Cleveland Browns to an outright outcast, reports from The Athletic indicate that the Carolina Panthers are going to name former #1 overall draft pick Baker Mayfield as their Week 1 starting quarterback.

Mayfield, 27 years old, beat out fellow 2018 NFL Draft pick Sam Darnold (who was taken just two picks later with the third overall pick) for the job, who the Panther acquired from the Jets last year following a similarly disappointing flame-out in New York.

The Carolina Panthers are expected to name Baker Mayfield their starting quarterback against the Cleveland Browns for Week 1 of the 2022 season, sources confirmed to The Athletic. He’s been competing with Sam Darnold but should be declared the starter when the team is ready to make the announcement. Panthers coach Matt Rhule had indicated he could decide between Mayfield and Darnold by their preseason game against the New England Patriots. [via The Athletic]

Poetically enough, the Carolina Panthers’ week one opponent is the Cleveland Browns, the team who replaced Mayfield with Deshaun Watson, a player that the NFL is seeking to suspend for “at least” one year following rampant allegations of sexual misconduct.

In a division with Tom Brady’s Tampa Bay Buccaneers and two teams in Atlanta and New Orleans that are likely to improve this year, the Panthers will be hoping that Mayfield and his moxie can elevate the club, which posted a 5-12 record in 2021, into playoff contention.