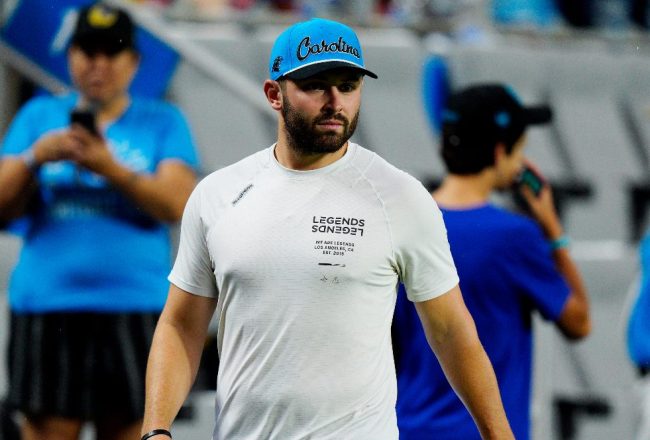 The sports world was hit hard by the news of Deshaun Watson receiving just a six-game suspension. Even so, it looks like Jacoby Brissett will get the start for the Cleveland Browns to start the season. They have an intriguing Week 1 matchup against the Carolina Panthers where Baker Mayfield is likely going to be the starting quarterback.

Mayfield recently weighed in on the quarterback situation in Cleveland.

During an interview session with the media, Josina Anderson asked Baker Mayfield his thoughts on facing Brissett in Week 1 instead of Watson. However, the Panthers quarterback is clearly focused on learning Matt Rhule’s playbook. The former Browns’ number one pick isn’t going up against Jacoby Brissett or Deshaun Watson, but instead Cleveland’s defense.

I asked Baker Mayfield about his thoughts on facing a Jacoby Brissett-led team after an initial ruling via Sue Robinson determining Deshaun Watson should be suspended for 6-games. The #NFL has since announced it is still reviewing appeal rights under pursuant to Article 46. pic.twitter.com/wYAuK2EMLF

Additionally, Anderson doesn’t shy away from asking Mayfield for his take about Deshaun Watson’s six-game suspension either. Even so, the Panthers quarterback doesn’t provide an answer as he sticks with the “it’s none of my business,” approach. Week 1 should be an interesting start to the season. Especially considering there is plenty of drama to go around between both teams.

At the end of the day, Baker Mayfield has to be chomping at the bit to play against his former team. Although he doesn’t care who is quarterbacking the Browns, Mayfield is set to have the revenge game for the ages. While he learns Matt Rhule’s scheme and adjusts to being with the Panthers, the veteran quarterback is doing everything possible to play Week 1 and beyond.