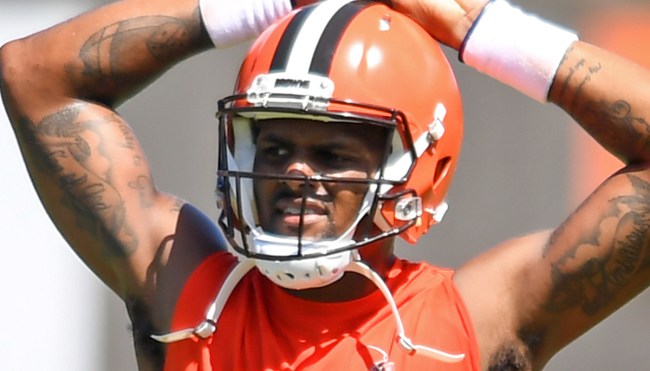 It’s been close to a year and a half since DeShaun Watson found himself at the receiving end of a lawsuit from a masseuse who said he “went too far” during a private session, a development that ultimately led to more than 30 women coming forward to accuse the quarterback of similarly inappropriate sexual demands.

Watson—who reportedly recruited 66 different women to give him a massage in less than two years—ultimately settled the majority of those cases out of court. However, there was still a major cloud hanging over the QB ahead of the upcoming season courtesy of the NFL’s investigation into the matter and the suspension it was expected to hand out.

On Monday, months of speculation finally came to an end when the former federal judge that the league hired to help determine the length of the punishment issued a proposal that would result in Watson being suspended for six games.

The NFL has three days to decide if it wants to appeal Sue L. Robinson’s decision and pursue a lengthier ban (it seems like there’s a chance it may end up doing exactly that when you considered if reportedly offered him a deal that would’ve led to Watson sitting out 12 games and paying an $8 million fine as opposed to the total of $0 her proposal levies against him).

As Tom Pelissero notes, there is another clause in the current agreement that has managed to attract plenty of attention, as Watson would have to agree to only receive massages from therapists employed by the Cleveland Browns if he also agrees to the terms.

That detail generated plenty of reactions from NFL fans, many of whom were simply baffled by the existence of the clause thanks to the implications concerning his culpability in the incidents that led to its inclusion.

How could Judge Robinson believe that this clause was necessary, but only give Deshaun Watson a six game suspension? https://t.co/bRoZh2lGfm

I’ll take “tweets that should be fake but actually aren’t” for $250M https://t.co/FJUmlScUE2

the decision also says that he must wear “one of those Hannibal Lecter masks” while in the facility https://t.co/XbzyBmRS2L

They gave the man only 6 games but can’t trust him to get massages outside of the team facility ??? https://t.co/xvNxLcB7k3

The next few days could be very interesting.