Would Baker Mayfield Be An Upgrade At Quarterback For The Patriots? Fans React To The Suggestion 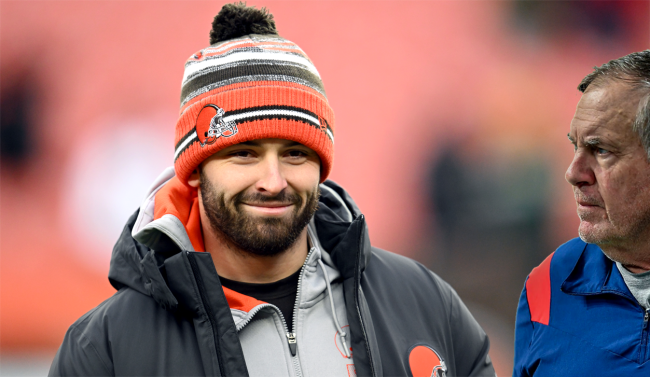 So far this offseason it seems like it would be easier to list the NFL teams who have NOT been somehow linked to Cleveland Browns quarterback Baker Mayfield.

Mayfield, who got very butthurt when the Browns appeared to be pursuing Deshaun Watson (they were), eventually requesting a trade (which the Browns reportedly denied), has been mentioned as a potential trade target of the Seahawks, Colts, Falcons, Panthers, Saints, and even the Buccaneers.

One team that hasn’t really been mentioned as a potential landing spot for Baker Mayfield is the New England Patriots. Until now.

On Monday’s episode of First Things First, Nick Wright stated that he believes Mayfield would be an upgrade for the Patriots at quarterback.

“Once upon a time there were rumors the Patriots wanted to draft Baker in the first round,” said Wright. “The Patriots are looking around the AFC, and you know what they know? They know that their best-case scenario with Mac Jones is that one day he’s the ninth best quarterback in this loaded quarterback conference. They should be looking for an upgrade. They won’t be.”

"Baker would be an upgrade for 1/3 of the league." pic.twitter.com/rYuIPXffQv

Would Baker Mayfield really be an upgrade for the Patriots?

Let’s take a look at the numbers and see if Wright might be on to something here.

Current Patriots quarterback Mac Jones will turn 24 years-old in September. He’s 10-7 as a starter and has passed for 3,801 yards, 22 touchdowns and 13 interceptions, giving him a QB rating of 92.5.

It doesn’t appear, just based on the numbers, that Mayfield would be an upgrade over Jones. The small sample size for Jones makes it tough to say for sure though.

Not many Patriots fans, or any other NFL fans, for that matter, seem to agree with Wright’s assessment of their team’s QB situation.

We don’t want him

I don't get why so many seemingly smart people on the NFL can't see Mayfield best is behind him. He is a dumpster fire.

Every team on that list ALREADY has a better alternative than Mayfield. If you can't keep a job at a crappy organization like Cleveland, then your choices are pretty much backing up a pro quarterback somewhere or bagging at Walmart.

Cleveland fans acted like Baker was an elite qb for four years. Leave The Steelers out of this whole conversation. Baker?! Not now, not ever!