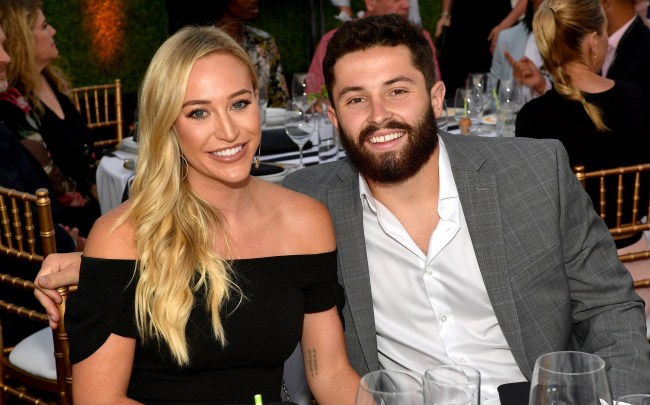 Baker Mayfield’s wife Emily has been feeling the wrath of Twitter following the Browns’ loss to the Pittsburgh Steelers on Sunday and it has nothing to do with her husband’s play on the field.

Emily is catching heat on social media for her hot take, putting veteran NFL reporter Mary Kay Cabot on blast for daring to ask players if their head coach Freddie Kitchens wearing a “Pittsburgh Started It” shirt had any effect on the outcome of the game.

“I thought it was pretty stupid,” Steelers guard David DeCastro told Cabot, adding, “That’s a lot of bulletin board material. I don’t know why you do that as a coach.”

Browns defensive tackle Sheldon Richardson said, “Win, lose or draw, you’ve got to have fun with it. I mean, it is what it is.”

Baker Mayfield probably had the best take when he told Cabot, “It’s just a t-shirt. I’ve done much worse.”

Emily Mayfield, however, was not in the mood for Cabot’s line of questioning. The special correspondent for Cleveland TV station WKYC tweeted at Cabot, “Why is this the focus of your questions? 🤔 MUCH more to focus on than that….”

Why is this the focus of your questions? 🤔 MUCH more to focus on than that…. @MaryKayCabot https://t.co/VDdjtilJpw

Emily, as you may recall, called a segment of Browns fans “idiots” just three weeks ago, so she is very familiar with the firestorm that comes with criticizing all things Browns.

Cabot wasted no time responding to Emily, tweeting, “I asked exactly one t-shirt question after the game. I asked Baker what he thought of it, and he defended Kitchens, which I thought was pretty cool. He gave a great answer, saying “I’ve done much worse.” Funny, and struck the right note.”

I asked exactly one t-shirt question after the game. I asked Baker what he thought of it, and he defended Kitchens, which I thought was pretty cool. He gave a great answer, saying “I’ve done much worse.” Funny, and struck the right note https://t.co/IAsMd20XkH

Emily fired right back, replying, “Football, in general, would be a good start.”

Needless to say, Browns fans were also quick to chime in with their two cents on this very odd beef.

What's funny is just a few weeks ago, Baker Mayfield blasted a Browns reporter for asking football questions ... and kept pointing out the reporter didn't know what he was talking about because he never played in the NFL. So which one is it Emily.

When the head coach decides to wear a shirt that distorts focus on football, these questions will follow. Perhaps if the browns were focused on football different questions would be asked by reporters.

Maybe the head coach should have focused on football in general, preferably during the week, and not on petty taunting. 🤷🏻‍♂️

Better question: Baker, will you make less commercials this offseason and spend more time learning to read defenses, so you can call audibles and not run the dumb plays your coach always send in, like other good QBs do? 🤔✌🏾

I actually disagree with your take Emily. This is a symptom of a much bigger issue that involves Leadership and Focus two very important character traits that the Browns front office and their Head Coach doesn’t seem to know a thing about.

Mostly because this is emblematic of the lack of leadership and focus it takes to be prepared to "do your job" as Baker and Freddie like to say. And the fact that shoes, or a t-shirt, or a visor, or GOAT shoes are even a thought means that you are not focused on the task

I get it, rivalries are at play and it's always physical but the reporters can say what they want, as can you. But these are questions people want answered. If the Steelers said it motivated them then of course they're gonna ask. Like if Trump wore a Democrats started it tshirt.

Because there is always something to focus on other than football 🏈 with this team. Watches cleats, t shirts, tweets. It’s a three ring circus not a well run organization. You of all people should want your man placed in a position to succeed and he is not. Hire Mike McCarthy

Honey it’s the same thing year after year and we support this team every year. I understand you’re new here but what would you like to focus on. The quarterbacks ineffective play? The defense ineffective play, can’t beat new quarterbacks. Coach wears shirt that says that, he is g

Sorry, but sports reporters always ask about how much or how little real or perceived "bulletin board material" influences players' motivations. I guarantee if Tomlin wore a shirt stating the opposite and the Browns had won, many players would say that added to their motivation.

God knows that had the Browns WON the game the whole team would have answered multiple questions about the shirt and you wouldn't be complaining now. Reporters always ask questions about things not directly related to the game. It happens to everyone.