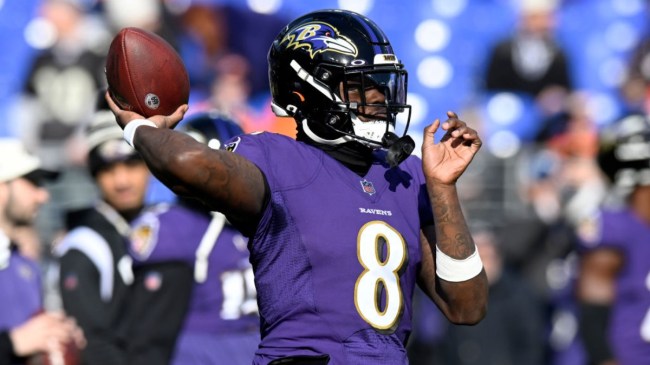 As we close in on the end of the NFL season, there are plenty of questions facing teams around the league at the quarterback position that they will need to address in the offseason.

Aaron Rodgers and Tom Brady could both retire.

The Jets are back in the QB market just 2 years after spending the 2nd overall pick on one.

The Raiders are moving on from Derek Carr after 9 seasons with him as their starter.

Still, there is no team facing bigger questions than the Baltimore Ravens.

After failing to reach an agreement on a contract extension with Lamar Jackson last offseason, the team now no longer has their star quarterback under contract.

The situation has led to plenty of speculation about whether or not Jackson will be with the team next year.

As they head into contract negotiations, what the future holds will largely depend on what the Ravens are willing to offer Jackson after their offers fell short last season. Jackson was reportedly looking for a fully guaranteed deal worth around what the Browns gave Deshaun Watson last offseason.

Today, ESPN’s Ryan Clark reported that the Ravens didn’t come close to meeting those demands. According to Clark, the Ravens offer only got as high as $133 million in guarantees.

We went back and forth on @FirstTake yesterday about @Lj_era8’s guaranteed money.

Based on a source with knowledge of the negotiations Lamar was initially offered $113 million in guarantees and eventually raised to $133 million.

That was the most Lamar was offered.

That’s not even close to the $230 million Watson got in guarantees and would only be the 7th most guaranteed money for a QB in the league.

It is also less than Kyler Murray got from the Cardinals in the same offseason even though he was still 2 seasons away from his contract expiring and hasn’t had the same level of success in the league that Jackson has.

Even after Jackson had another injury-plagued season in 2022, the Baltimore Ravens are going to need to come up with a much better offer this offseason or they’ll be searching for a new QB very soon.