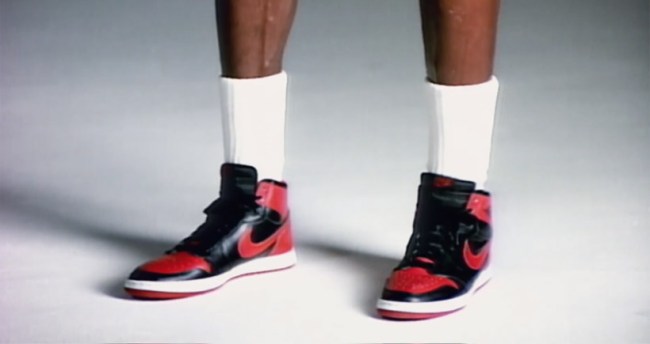 “On September 15th, Nike created a revolutionary new basketball shoe. On October 18th, the NBA threw them out of the game.”

At least that’s what Nike wanted everyone to believe about the original Air Jordan 1 “Bred” back in 1985.

As they once said in the 1962 Western The Man Who Shot Liberty Valance, “When the legend becomes fact, print the legend.”

Which is exactly what happened with the OG Air Jordan 1… and now, according to numerous reports… it’s coming back.

But first, a little backstory on the legendary Air Jordan 1 “Bred” from SneakerNews.com.

Contrary to what Nike marketing lore has taught you over the years, the black and red Air Jordan 1 was actually not the shoe banned by the NBA. Research done by Air Jordan fans has determined that the “banned” shoe in question was the Nike Air Ship—a shoe similar to the design of the Air Jordan 1—that the NBA took offense to after Jordan wore them in a black and red colorway during the 1984 preseason before the Air Jordan 1 was ready. Not following the NBA’s rule that a sneaker had to be 51% white, the NBA essentially banned Michael from wearing them, and the next game he indeed did switch to a white-based version of the Air Ship.

And that part about Nike paying $5,000 fine every game that he wore the black and red colorway on court? That apparently was part of the marketing myth, as well, since there is no evidence of Michael ever wearing the “Bred” Air Jordan 1 in a game any time that season. Any photos you see of Michael Jordan wearing the Air Jordan 1 in an NBA game will be the “Chicago” or “Black Toe” colorways

Now does any of that mean that we are less excited at the prospect of the OG AJ1 returning? Hells no!

According to several social media accounts which “leak” sneaker news such as this, it’s true.

For example, @djfolk writes that the Jordan 1 will return on November 29th with the OG cut and OG height, and it will be the biggest production release numbers-wise of any Jordan 1.

Does this mean that it will actually happen? Fingers crossed, but based on the number of sites reporting it as fact, we’re very hopeful.

The Jumpman just pulled the ace from their deck. https://t.co/CNccsuoTnw