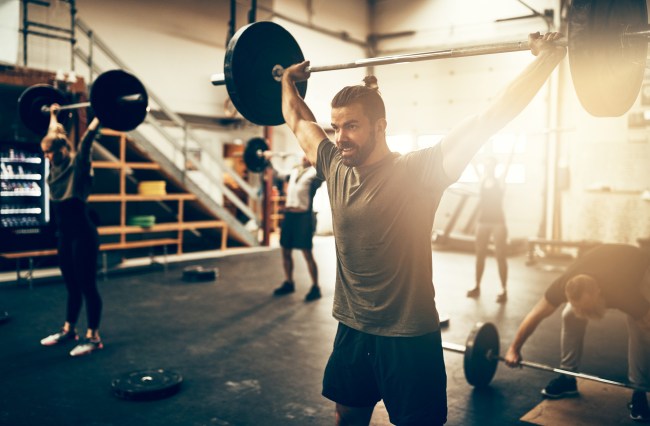 Ask ten bros their opinion on the best upper body exercise and I’d be willing to bet all ten would say the barbell bench press. Hell, ask a hundred and it wouldn’t surprise me if all hundred said the same thing.

The barbell bench press has long been the king of upper body exercises. So much so in fact, that Monday is know as International Bench Press Day. But it wasn’t always this way. One barbell exercise actually use to reign supreme over the bench press.

“The day the barbell was invented, the guy who invented it figured out a way to shove it over his head.” – Mark Rippetoe, Starting Strength.

Prior to the rise of powerlifting in the 60s and 70s the overhead press was actually the preferred upper body pressing exercise of strength athletes. In fact, the clean and press was actually an Olympic weightlifting event until they dropped because it was too hard to keep people from cheating during the movement.

The primary muscles of the overhead press are the shoulders and arms, and to a lesser extent the upper chest. However, the muscles of the upper back, core and legs are involved as well and play a role in stabilization.

Now, I know you’re probably thinking, “But those muscles also help with stabilization during the bench press too!!”. And yes, I agree. However, there’s a difference.

During the overhead press your only points of contact with a stable surface (the ground) are your feet. With the bench press though, not only are your feet and legs helping with stabilization, but you also have the bench to work with, which is in contact with the ground at multiple points. Think of it like trying to balance on a chair with two legs as opposed to like five or six legs.

Having imbalances like this can lead to a whole host of problems, including poor posture, and stress on the joints, all of which can lead to more serious injuries.

Lastly, a strong overhead press has a direct carryover to building a strong bench press, due to the strength built through the shoulders and triceps. Ask many of the worlds best benchers and you find that the overhead press is a regular part of their programing.

Like any compound, multi-joint movement, there’s a right way and a wrong way to overhead press. Here are a few tips and a video demonstration so you can perform a proper barbell overhead press.

There are a few things to remember when performing the exercise: