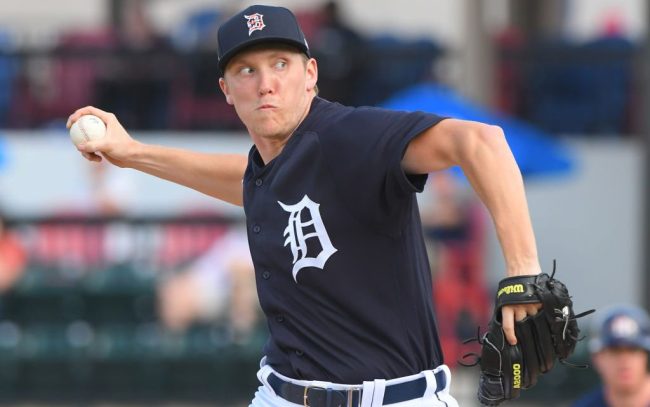 Detroit Tigers relief pitcher Zack “Wild Thing” Hess has a lot riding on the upcoming season. Not only is he trying to increase his standing in the Minor League system, but the velocity of his fastball could determine whether he has to get inked.

Hess, who was invited to the team’s Spring Training camp this month, will be paying extra attention to the radar gun this season after making a bet with his agent Rachel Luba. If Hess hits 100 miles per hour on his fastball in 2021, Luba, who also represents Trevor Bauer, will get a tattoo. If not, Hess will be the one in the chair with a needle to his skin.

Lol alright Twitter fam, yes or no—do I make this bet with my client @Zack_Hess38 ?? 😆 pic.twitter.com/XeZ0yODzsG

Luba tried to get Hess to increase his social media presence during the offseason and the wager was born shortly thereafter.

“This offseason, she tried to get me a little bit more active on social media and whatnot,” Hess explained. “So I guess we were just kind of having some fun, and you know, just came up with this bet [and] whatnot. If I hit 100 mph this year, then she’d have to get a tattoo. And if I don’t, if I fall short of that, then I’d have to get a tattoo. Just trying to have fun with it, and you know, try to create a little bit of fun this offseason. We’ll see what happens.”

The 23-year-old LSU alumnus was known as ‘Wild Thing’ in college, referencing his ability to turn into a maniac on the mound, much like Charlie Sheen’s character in Major League. He has some nasty stuff and brings next-level intensity.

Hess played into the persona as it began to grow and cut his hair like Ricky Vaughn in the movie. He eventually added the glasses to complete the look.

If you don’t know the movie, Vaughn (Sheen’s character) was know for his electric fastball, lack of control at times and an unhinged personality. That description isn’t too far away from Hess’ scouting report.

Entering his second full season in professional baseball, Hess has added about 15 pounds to his 6-foot-6 frame, putting him around 230 pounds. His diet included 4,000 calories a day until he reached his target weight, with a lot of chicken and rice. He will hope that added weight pays off in his quest to hitting triple digits on the gun. If not, he’ll be sporting a new tattoo next year.

Hess started in Class A ball in 2019 but lost last season after it was cancelled because of the global pandemic. He has the experience as a college guy to rise quickly through the ranks and being invited to spring training is a good start.