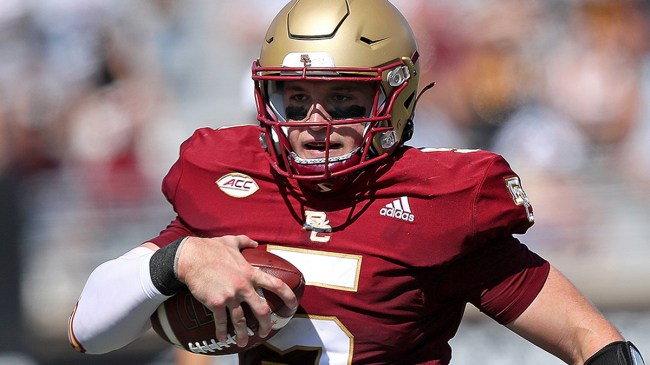 Boston College football fans haven’t had a ton to cheer for since Matt Ryan’s senior season in 2007, but they’ve been granted what seems to be the brightest glimmer of hope in the past 15 years heading into the upcoming campaign thanks in no small part to quarterback Phil Jurkovec.

Jurkovec arrived in Chestnut Hill in 2020 after two seasons at Notre Dame and was entrusted with the starting job by first-year coach Jeff Hafley. He showed plenty of promise during his first year with the Eagles, and while he was sidelined for a solid chunk of the 2021 season thanks to a thumb injury, there are plenty of people who think he’s poised to use his final year of eligibility to make a mark and help the perpetually rebuilding program surpass the seven-win mark for the first time since 2008.

The QB hasn’t exactly been shy about voicing his disappointment concerning his time with the Fighting Irish since transferring, and he did exactly that during a recent conversation he had with Boston.com prior to BC’s season opener against Rutgers on Saturday.

Jurkovec asserted Notre Dame’s “football team and culture is not what people think” after stating he “was disappointed by some stuff while I was there,” and while he largely strayed away from naming names, he was willing to make an exception for former head coach Brian Kelly.

Plenty of people thought Kelly showed his true colors thanks to how he handled his defection to LSU in the middle of last season—and it sure seems like Jurkovec would agree that saga only confirmed what he says he learned about the coach’s character when he and his family reached the end of their rope about attempting to address some of their concerns with him:

Barring some wildly improbable series of events, Jurkovec won’t get the chance to engage in a grudge match against Kelly in a showdown with LSU. However, he will have the opportunity to get some symbolic revenge on his former program when the Eagles face off against the Fighting Irish as likely underdogs on November 19th.