Michelle Beadle Reportedly Getting The Axe From ESPN, Will Be Replaced On ‘NBA Countdown’ 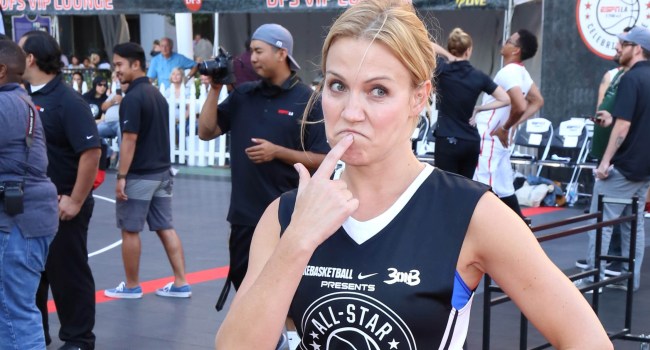 Despite her denials, Michelle Beadle is reportedly being replaced by ESPN as the host of NBA Countdown.

There had been rumblings over the past several weeks that the longtime ESPN show host could be on the outs with the company she’s worked for since 2009.

ESPN executives were reportedly unhappy with Beadle for failing to promote her program on outside venues and for rarely appearing on ESPN’s morning show Get Up!

It was also reported that “factions in Bristol not enamored” with Beadle as the host of NBA Countdown.

Beadle admitting on the air that she no longer watched the NFL or college football, two of ESPN’s biggest properties, also reportedly did not go over well with her bosses.

In July, a report by SportsbyBrooks.com claimed Beadle “will probably no longer appear on ESPN on a regular basis and that the company has been contemplating possibly moving her to ABC.”

This report came a month after SportsbyBrooks.com claimed to have “learned from multiple sources that ESPN on-air talents Maria Taylor and Rachel Nichols are under consideration to take over as host of Countdown.”

On Friday, Richard Deitsch of The Athletic tweeted, “ESPN is planning to name Rachel Nichols & Maria Taylor as the hosts of NBA Countdown for this upcoming season. Formal announcement should come in coming weeks. The expectation, via sources, is both will host the show. They’ll split the assignment in some manner.”

ESPN news: ESPN is planning to name Rachel Nichols & Maria Taylor as the hosts of NBA Countdown for this upcoming season. Formal announcement should come in coming weeks. The expectation, via sources, is both will host the show. They'll split the assignment in some manner.

Nichols will continue to host The Jump. Regarding other staffers on the show: Chauncey Billups will move from studio to work as a game analyst. Jalen Rose will be back on NBA Countdown. I’m not sure about Paul Pierce for this season.

As for Michelle Beadle: She’s well-liked by the talent she works with and she’ll be working on-air somewhere. The Q is whether that will be for ESPN or elsewhere. To be determined.

Reactions by fans to the news of Beadle being replaced on NBA Countdown by Nichols and Taylor has been mixed, to say the least.

This is great news, Michelle Beadle ain't it https://t.co/LGRW6MYiQe

Less Michelle Beadle and Paul Pierce is a win for everyone 👌🏽

That show is the Timberwolves of pregame shows — it has never been good. Time to try something different.

Good.....Beadle got annoying. Nichols and Taylor will be a fine addition to this show.