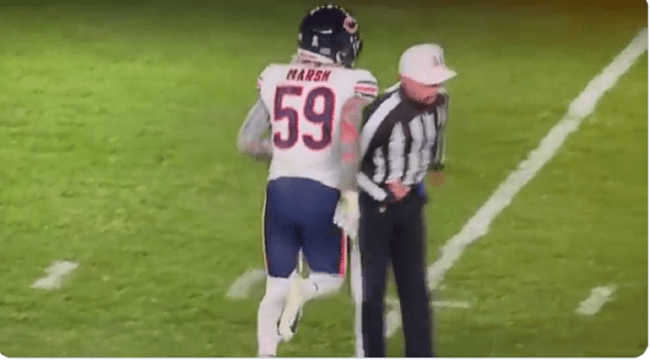 Bears’ Cassius Marsh is not happy that ref Tony Corrente was able to hip check him on Monday night.

At the end of the Bears-Steelers game, Corrente appeared to blatantly hip check Marsh while calling a taunting penalty.

After the game, Marsh called out Corrente over the hip check and called it “incredible inappropriate.”

#Bears LB Cassius Marsh, who was called for taunting late in the 4th quarter, says he didn’t say anything towards the #Steelers bench to warrant a penalty.

Also says the ref hip-checked him and if it was the other way around he would’ve been ejected. pic.twitter.com/TpSIJjH625

“On my way to the sidelines I got hip-checked by the ref and it’s pretty clear. If I were to do that to a ref or even touch the ref, we get kicked out of the game and possibly suspended or fined. I just think that was incredibly inappropriate.