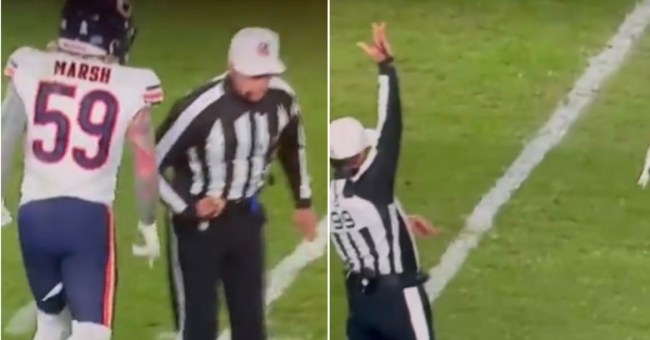 Not only did ref Tony Corrente call one of the worst taunting penalties of the season, but he also hip-checked a Bears player in the process of doing so.

In the fourth quarter of the Bears-Steelers game, Bears’ Cassius Marsh was bizarrely penalized for taunting while staring down the sidelines after a play.

This was just called taunting. The officiating in the NFL continues to be a disaster. This entire game has been pathetic. pic.twitter.com/08UgyGyhJC

While running to his sideline, Corrente appeared to deliberately hip-check Marsh while calling pulling out his flag to call a taunting penalty.

Why did the ref hip check the player, then throw the flag? pic.twitter.com/zcuyyHgSoJ

Fans are now calling for the NFL to investigate the ref for hip-checking an NFL player.

NFL needs to suspend that Ref. He intentionally stuck his butt out ,so Bears player could run into him and then threw a flag.

Seemed like that Ref backed into That bears LB and THEN threw the flag, THE FIX IS IN! investigate that ref.. @NFL @NFLOfficiating

@NFLOfficiating just can’t help but try being the center of attention. Game. Isn’t. About. You. The hip check as an excuse to throw a flag is a disgrace

Corrente should be suspended a game for this. what an absolute crock of sh t. #mnf @NFLOfficiating #nfl https://t.co/7qhXdmwMfb

This ref should be fired. Not even joking https://t.co/LryH2mwZVw

What on earth are we doing @NFL? @NFLOfficiating needs to answer for this type of garbage. They're making the sport a joke to watch https://t.co/6YYYQnve2p