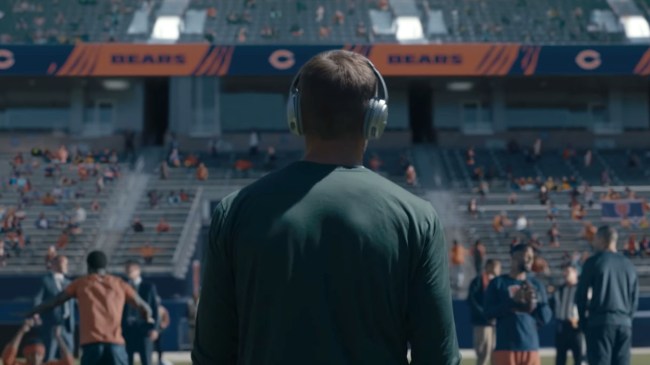 After being forced to sit through an annoyingly anti-Chicago Bose commercial featuring Green Bay Packers quarterback Aaron Rodgers for much of the season, one Bears fan finally had enough.

After defeating the Packers, and Rodgers, this past Sunday to clinch the NFC North, and drop Green Bay to 5-8-1 on the season, this Bears fan decided it was time to update that commercial to better reflect the current relationship between Aaron Rodgers and Chicago football fans.

For the record, here is the original Bose commercial that’s been driving Bears fans nuts this season.

We all hate that Aaron Rodgers Bose commercial right?

Well, I am sure you’ll love this remix I made featuring the @ChicagoBears.

Also for the record, Lord Aaron of House Rodgers is not going anywhere, Packers fans! Sheesh!

.@JimmyKimmel, @KChenoweth, @TPain, and @AaronRodgers12 want to watch #GameofThrones with you.

Start Season 1 today on @HBO and follow along with #ForTheThrone: https://t.co/crYx3EcBhW pic.twitter.com/SZ3YKAeEEy

People. Trading Aaron Rodgers would set off a nuclear bomb in the Packers salary cap. The Packers have committed to Rodgers. He’s not going anywhere. https://t.co/xuECnAYEWH

ABC-27 in Madison just being honest here (from @thisisjnn) pic.twitter.com/SSGXrN1vUP

Needless to say, Bears fans were very impressed with the updated commercial.

This is the most beautiful thing i’ve ever seen.

I promised myself to fast forwardor mute these commercials until GB was eliminated before I watch them. Now I’m loving them. 🐻⬇️

Love this. Every time I had to watch that stupid commerical I was hoping someone would remix it.

I think those are the playoff chances cancelling headphones