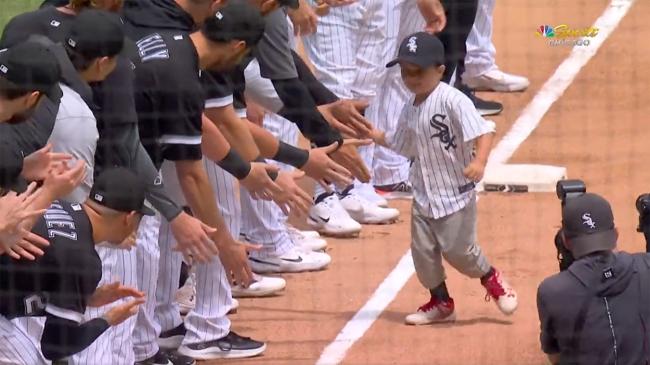 Sports are often a microcosm of the world in which we live. And with that being said, some things are bigger than sports.

One of those moments unfolded prior to Saturday’s game between the White Sox and the Orioles. It was incredible.

Today we welcomed 7-year-old Beau Dowling for an ultimate day!

Diagnosed with high-risk neuroblastoma as a toddler, Beau battled through stem cell transplants as well as several rounds of chemotherapy, radiation and immunotherapy. He recently was diagnosed with thyroid cancer. pic.twitter.com/Y2jvcKh9UE

Beau Dowling, a seven-year old boy who was diagnosed with neuroblastoma as a toddler and recently underwent treatment for thyroid cancer, got to have his Major League moment. Dressed in full uniform, he got to hit a home run that he will never forget.

Sox give “Home Run For Life” for 7-year-old Beau Dowling, who was diagnosed with high-rush neuroblastoma as a toddler, recently underwent treatment for thyroid cancer: pic.twitter.com/XtxOpoOFqg

Here is Beau running the bases. Such a great moment. So much love shown. pic.twitter.com/mudGRWChmF

After running the bases with both teams and the crowd cheering him on, he threw out the first pitch. There was not a dry eye in the stadium.

Dowling also got to meet by Baltimore outfielder and cancer survivor Trey Mancini. The two shared a moment after Dowling crossed home plate and Mancini told the inspirational young slugger his story.

“Trey, he’s also battled cancer and he just wanted to give a few words to Beau and that was just amazing,” said Beau’s father. “From what I heard, it was just ‘Beau, keep fighting.’ That was, to say the least … It was emotional.”

Trey Mancini on meeting 7-year-old cancer fighter Beau Dowling before the game: “I wanted to go over there after he ran the bases and just tell him he was awesome. I told him I had cancer two years ago and I’m doing well, and I know the same thing is going to happen for him.” pic.twitter.com/GBtmwjXzmg

It was a day that Dowling will never forget. He was a MLB player for a day and a huge smile never came off of his face.

Days like Saturday are a great reminder to live in each moment and to keep going. Dowling is an inspiration, a joy to this earth, and forever a White Sox hero.