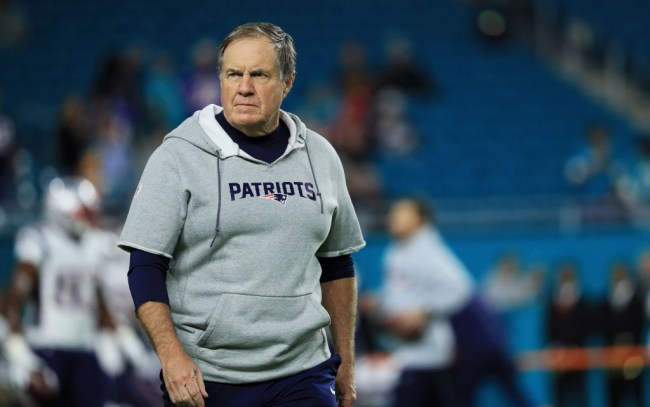 Things may be unraveling for the Patriots this offseason (probably not), but New England’s head honcho Bill Belichick’s still enjoying himself. He even recently got himself a new Alaskan Klee Kai puppy with his longtime girlfriend Linda Holliday.

And, of course, Nike being Belichick’s pup, he has his own hoodie with the sleeves cut off because what else would you expect a dog owned by The Hoodie to wear?

Belichick and Holliday were taking in the women’s lacrosse game at Boston University between the Terriers and the Holy Cross… whatever they are, where his daughter, Amanda Belichick, is the team’s head coach.

So are cutoff hoodies for dogs like a thing? I mean, I know dog hoodies are a real thing, but if Bill Belichick were to ever brand his own version with the sleeves cut off he could probably sell a million of them to Patriots diehards.

Left the broadcast booth at BU last night and spotted Bill Belichick waiting for his daughter, Amanda, who’s the head lacrosse coach for Holy Cross. His girlfriend, Linda Holliday, is carrying a dog in that blanket. #Patriots pic.twitter.com/m3hzPvPH8v