Bellator 250 Preview: Is Mousasi vs. Lima the Best Middleweight Fight This Weekend? 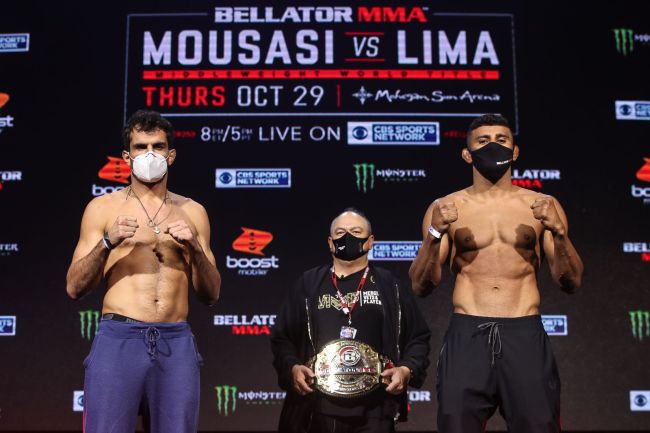 Right off the bat, I must admit that the headline is a bit of a trick question.

See, former Bellator middleweight champion Gegard Mousasi and current welterweight champ Douglas Lima, who is stepping up a weight class in search of a second belt, aren’t even fighting this weekend. They’re throwing down tonight, October 29 (8 p.m. EST / 5 p.m. PST) on CBS Sports Network for the vacant middleweight title. But even then, it’s still the best fight of the week, despite some stiff competition.

It’s actually a rather packed weekend of MMA fights, with Asia’s ONE Championship promoting three title fights in Singapore on Friday and the UFC preparing a proper sendoff for the legendary Anderson Silva as “The Spider” heads off into retirement. However, Mousasi vs. Lima stands out for oh so many reasons, starting with the level of the competitors, both of whom are top-five talents in their respective weight classes in the world, regardless of promotion.

We've got a #SuperFight coming your way this Thursday, October 2️⃣9️⃣th, LIVE & FREE on @CBSSportsNet!

At 35, Mousasi is one of the most well-rounded, experienced, and accomplished middleweights on the planet. Having won eight out of his last nine bouts — the only loss came via majority decision — Mousasi is a big and powerful middleweight who is nasty and accurate with his punishing strikes, complementing his standup with a crafty submission game.

Not only a former world champion with Bellator, Mousasi also won titles with the Strikeforce and Dream promotions. He’s had championship mettle for over a decade, beating top names in mixed martial arts like former UFC champions Lyoto Machida, Chris Weidman, and Vitor Belfort, not to mention former Pride champ Dan Henderson and one-time Strikeforce titlist Jacare Souza. He also beat Uriah Hall, who fights Anderson Silva in his farewell fight on Saturday.

During his 17-year, 55-fight MMA career, Mousasi has proven that he’s dangerous everywhere inside the cage and that he’s game whenever the bell rings. He’s also proven an ability to dominate Bellator welterweight champions looking to moonlight up a weight class, as evidenced by his dismantling of Rory MacDonald in 2018, dominating and brutalizing the former Bellator 170-pound champ, ultimately winning the fight via second round TKO.

Best fight in week where Bellator, UFC and ONE Championship all have cards.

Mousasi vs. Lima going to be a fascinating chess match. #Bellator250 pic.twitter.com/fScwwZAMFD

But, Lima appears to be an entirely unique challenge, who will not be plagued by the pitfalls of MacDonald, his welterweight predecessor.

The winner of Bellator’s million-dollar welterweight tournament, Douglas Lima is a massive welterweight, who, like Mousasi is equally skilled in the striking and submission departments.

Having thrice won the Bellator welterweight title, Lima has won six of his last seven fights, essentially clearing out the 170-pound division. Now he seeks a new challenge, along with a second belt, and Mousasi may very well be the biggest test of his 39-fight MMA career. And, where Mousasi will have a size advantage, Lima will need to be the faster, busier fighter at Bellator 250 in order to outpace and outlast his adversary.

It will be interesting to see Lima, who most often owns a size advantage over his opponents, as the smaller fighter. However, with an additional five months to prepare for Mousasi — the bout was originally scheduled for Bellator 242 on May 9 before the COVID-19 pandemic forced the lengthy postponement — Lima has had the time to pack on the size at his new American Top Team gym in Atlanta, where he is the owner and proprietor.

Of note, is that Lima did contract the Coronavirus earlier this year. And, while he claims his symptoms were not severe, it will be interesting to see how a world class athlete looks in competition after recovering from a bout with COVID. Perhaps that’s looking too deep into the situation, but it’s 2020, and COVID-19 is the biggest international story in decades, so when it intersects with mixed martial arts, it must be mentioned.

The Coronavirus will not steal the sporting headlines come Friday morning though. That ink will belong to the winner of the Mousasi-Lima fight, who will take home Bellator’s middleweight belt.

On paper, Mousasi vs. Lima is the best fight Bellator can make this year, save the upcoming final of its featherweight tournament, which still needs to be determined — semi-finalists A.J. McKee and Darrion Caldwell meet on November 19, while a pair of quarter-final matches will play out on November 12 as incumbent champion Patricio Freire fights Pedro Carvalho, and Daniel Weichel faces Emmanuel Sanchez. And while the Mousasi-Lima fight looks good on paper, it has all the potential to look even better in practice, where both fighters will attempt to violently and artistically impose their wills on each other.

No doubt it’s going to be one hell of a fight.