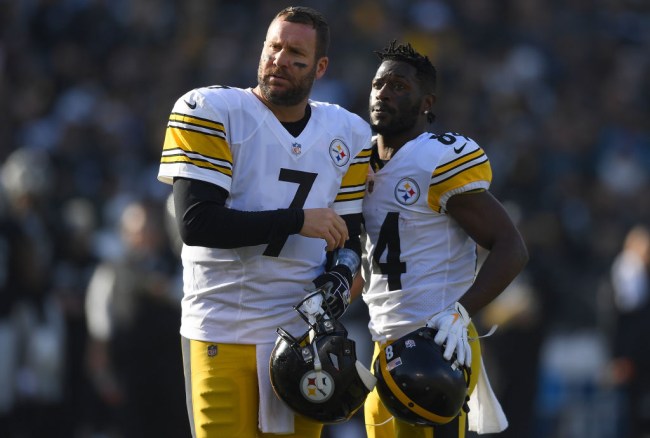 At the end of last year’s NFL season, it became pretty evident that Antonio Brown’s time in Pittsburgh had come to an end when he went AWOL after getting into it with Ben Roethlisberger, who repeatedly belittled the wide receiver at practice.

Brown would ultimately find himself dealt to the Raiders in a laughably lopsided trade and the quarterback would eventually try to make nice to no avail, as his former teammate made it very clear the two weren’t exactly on the best of terms.

The Steelers reportedly fielded offers from a number of teams before shipping Brown off to Oakland—including the Patriots, who were initially unable to land Brown because Pittsburgh didn’t want to give them a weapon that could ultimately be used against them.

However, as we all know by now, Brown’s tenure on the West Coast was short-lived, and after being released by the Raiders, he found himself picked up by New England, who absolutely thrashed Pittsburgh on Sunday night even without the help of the superstar.

Prior to the game, Steelers head coach Mike Tomlin was asked about the acquisition and declined to address the drama.

Mike Tomlin's only focused on who is playing tonight when asked about Antonio Brown to the Patriots. pic.twitter.com/LxEl3p76tq

After the contest, Roethlisberger also fielded an inquiry concerning the situation and he delivered a hilariously terse one-word answer and convinced literally no one that he could care less.

The Steelers won’t face off against the Patriots again this season unless the two teams end up meeting up in the playoffs and there’s nothing I’d love more in the world than to see that happen.