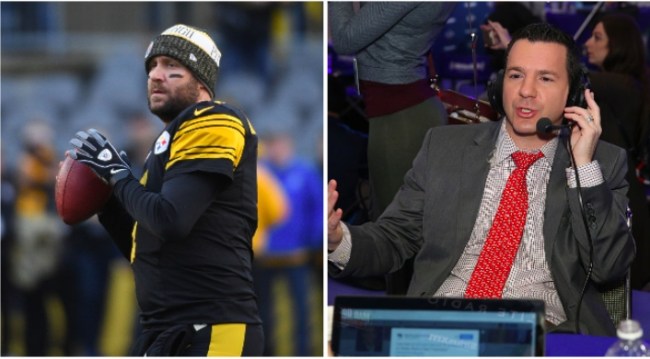 Ben Roethlisberger doesn’t have any patience for your Twitter slander. Or your pre-emptive slander. It’s long been documented that the Steelers quarterback blocks everyone and their mothers on Twitter. He even blocked BroBible’s very own Jorge Alonso, who is by all metrics, a fair and decent man. Don’t worry, Jorge, evidently no one is safe.

LOL wait why am I blocked by Ben Roethlisberger

I am also blocked by @_BigBen7.

Today I learned that I am BLOCKED by Ben Roethlisberger! I must investigate. pic.twitter.com/dvuwSi1HlV

There seems to be no rhyme or reason to Big Ben’s hatred for members of sports media and he hasn’t explicitly addressed his beef with any of the people above, but there is one sports figure that he absolutely despises: NFL Network’s Ian Rapoport.

From @gmfb Weekend: Unlike that faulty X-Ray machine, I can actually tell you: #Steelers QB Ben Roethlisberger did, in fact, have cracked ribs last week. Mystery solved. pic.twitter.com/iTEJMtsNrc

Roethlisberger appeared on 93.7 The Fan on Tuesday to call Rapoport’s credibility into question and dismiss any news he breaks:

“You shouldn’t even say his name on this show because nothing that comes from what he says is there any truth to. My wife texted me [about Rapoport’s report] before the game when I was in the locker room. I don’t know where that guy gets his information, so I don’t want to give him any credence on this show.”

In Big Ben’s defense, back in 2013, Rap Sheet reported that Roethlisberger wanted to be traded to the Arizona Cardinals while being reunited with his former QB coach in Pittsburgh, Bruce Arians.

Roethlisberger also took aim at sports media in general for their reporting on his criticism of rookie receiver James Washington after Washington dropped a sure TD in Pittsburgh’s loss to Denver on November 25.

“The national reporters, the ESPN talking heads, they think they know,” Roethlisberger said, “but they really don’t know what’s going inside of our locker room.”

At the time of this writing, Rapoport has yet to defend his honor.