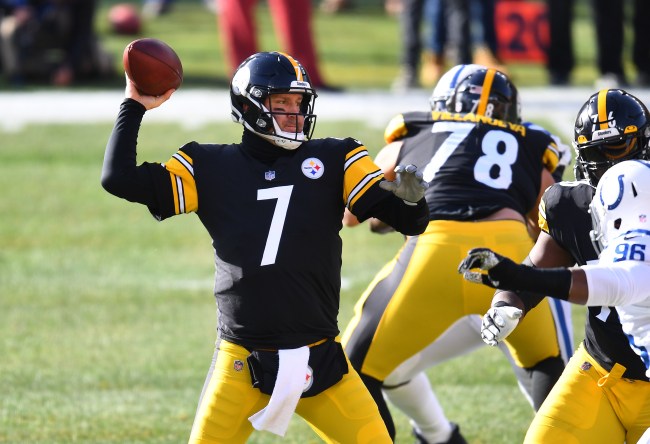 Ben Roethlisberger and the Pittsburgh Steelers were desperate for a victory during a Week 16 contest against the Indianapolis Colts. Not only did the AFC North title potentially hang in the balance, but the quarterback had struggled over the past three weeks, and watched his team go from 11-0 to 11-3, with the Steelers playing like crap during the most important time of the year.

if you want to know why the Steelers offense looked better in the 2nd half, it’s because in the 1st half, pre-snap the Colts were calling out OC Randy Fichtner’s terrible, predictable plays…

so Ben called his own plays that were not part of Fichtner’s game plan in the 2nd half pic.twitter.com/QEEwGIC5Bb

That’s when Ben Roethlisberger took matters into his own hands.

According to Silver, after seeing the Colts stifle his Steelers after the first 30 minutes, Roethlisberger apparently began calling his own plays in the huddle and line of scrimmage to throw them off. Pittsburgh wideout JuJu Smith-Schuster even said Big Ben started calling plays the team hadn’t even practiced and were from the past.

This is wild. Per @MikeSilver the Colts' defense was calling out plays pre-snap the Steelers were running in the 1st half. So Roethlisberger started pulling out plays they hadn't even practiced. And it worked. https://t.co/Unar8nW2Fg

Remarkably, Ben Roethlisberger’s strategy worked, as the future Hall of Famer led the Steelers to a 28-24 victory over the Colts, which won Pittsburgh the AFC North title, clinched a playoff spot and, for the time being, turned off the panic button following a three-game skid. It’s not necessarily the ideal way to win games, but, hey, it worked.

As for Pittsburgh’s offensive coordinator Randy Fichtner, sheesh, this really has to be a major blow to your ego. Dude, you’ve got one job: To run the offense. The fact that Fichtner’s play-calling was so predictable that the Colts knew what was coming beforehand makes it seem like the guy needs to be a little bit more creative moving forward, especially if the Steelers want to make a deep playoff run.

Who knows what happens in the future with Randy Fichtner and his job security, but his offense has looked pretty pathetic, well, all year long. Maybe the coach should lean on “backyard” Ben Roethlisberger more often if it produces the results NFL fans saw in the second half against the Colts.