Ben Roethlisberger: Tom Brady ‘Didn’t Look Like He Wanted To Be Out There’ 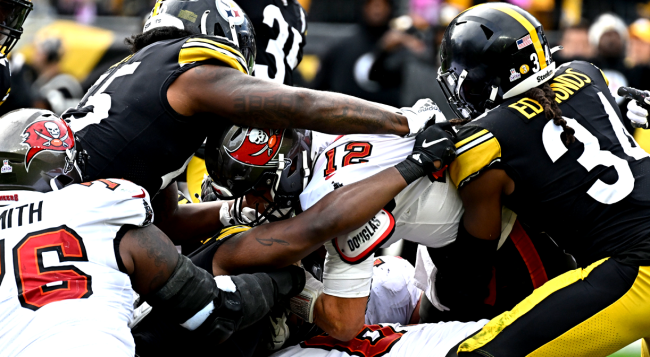 After playing 18 seasons at a high level in the NFL, Ben Roethlisberger knows a lot about what goes through the mind of a player. Especially a player who has been playing the game for well over two decades straight.

So when the former Steelers quarterback notices something amiss with Tom Brady and the Buccaneers, like he did on Sunday during Pittsburgh’s shocking upset of Tampa Bay, he might be on to something.

“It was weird seeing him there and not be across the field from him,” Roethlisberger said on the latest Footbahlin’ with Ben podcast.

Despite that feeling, Ben was more than satisfied with just watching.

“I was up there happy as I could be watching the game,” he said. “I was enjoying being up there watching the game and to me, this is just my opinion, and Tom is the greatest. The Super Bowl rings show it and talk about it whatever. It didn’t look like he wanted to be out there. Maybe it was the pressure. He was getting hit. Whatever was going on.

“I remember at one point I looked down there, I was telling, I don’t know if I was telling Jason or Brian, but I’m like, there’s no way he’s enjoying this, no way. So I was up there like just I was enjoying being up there watching the game, but it just didn’t look fun to him.”

Tom Brady with some words to his offensive line. pic.twitter.com/qBqjD7vfKg

“He’s got a lot going on, obviously,” Roethlisberger continued, “as you hear and read about, whatever. I know he just went up to his former owner’s wedding like two days before. That’s big news now that he flew up there missed a walk through and went up there, but, you know, it’s whatever you choose to do.

“And like I said, when a defense gets after you, sometimes your anger and your disgust for things happen because the other team is affecting you, not just because it’s you, so. But yeah, it did it just looked like a different Tom.”

“I almost look at like a football season like you’re going away on deployment in the military, and it’s like, man, here I go again,” Brady said on his Let’s Go! podcast while speaking with guest Kevin Durant. “There’s only one way to do it.

“And I think Jim, we’ve talked from time to time just about how do you enjoy the certain moments of it? The reality is you can really only be authentic to yourself, right? Whenever you may say, ‘Oh man, I want to, you know, make sure I spend a little more time doing this.’

“When it comes down to it, your competitiveness takes over and as much as you want to have this playful balance with the work balance, you’re going to end up doing exactly what you’ve always done, which is why you are who you are. You’re going to go, ‘how do I get it done?’ You know, ‘what do I got to do to get it done?’”

Was not going to the walk-through this week part of that “getting it done” he is talking about?