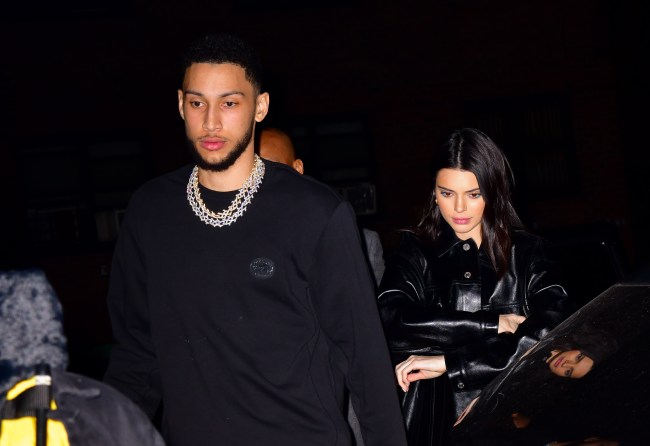 Ben Simmons and Kendall Jenner have reportedly broken up, according to the New York Post. While I’m really bummed for the Philadelphia 76ers point guard for losing his gal, I have to admit, I really don’t give a damn that another celebrity couple has called it quits. In fact, given the backlash that some Sixers fans had following Simmons and his teammates getting bounced in the second-round of the NBA Playoffs this season — with some blaming Kendall Jenner — a lot of people in Philly are probably happy with this news.

I’m not going to sit here and promote the whole “Kardashian-Jenner” curse thing, but, let’s face it, Ben Simmons no longer dating Kendall Jenner is probably a good thing for his basketball career. No longer will he feel it necessary to roll with the celebrity crowd, or be in the limelight, or focus on anything except perfecting his craft. Needless to say, this whole relationship ending should be a good thing for Simmons — because Kendall was a walking thirst trap, let’s admit it.

Anyway, given the fact that Ben Simmons and Kendall Jenner are both now single, everyone and their mother had some jokes about the unfortunate split. No, not about reactions or anything like that, but because of Simmons’ poor shooting ability, which people on Twitter related back to Kendall and him calling it off. Take a look at the pretty ruthless tweets people were tossing out after hearing news of the break up.

Only layups for Simmons, no long distance…

When asked who she would date next, Kendall replied: "I'm not sure, but Klay Thompson has a shot."#bensimmons #KendallJenner #NBA pic.twitter.com/wyjKJ02eJc

Ben Simmons definitely about to shoot his shot more. pic.twitter.com/cGjv2pVUZU

It’s not basketball, but Ben Simmons will be shooting his shot all summer.

Maybe now he can spend some time putting up jumpers instead of IG posts for Kendall.

Although Kendall Jenner recently told Vogue Australia, where Ben Simmons is from, that she could “maybe” see marrying the 76ers star “one day,” that’s obviously come to a halt now. And given the fact that Simmons can’t shoot his shot from anywhere outside of five feet on the court, hopefully he finds a nice woman in Philadelphia so he doesn’t have to try to make things work from long distance. See, there are just too many jokes.