Ben Simmons Didn’t Actually Practice With His Phone In His Pocket, According To Shams Charania 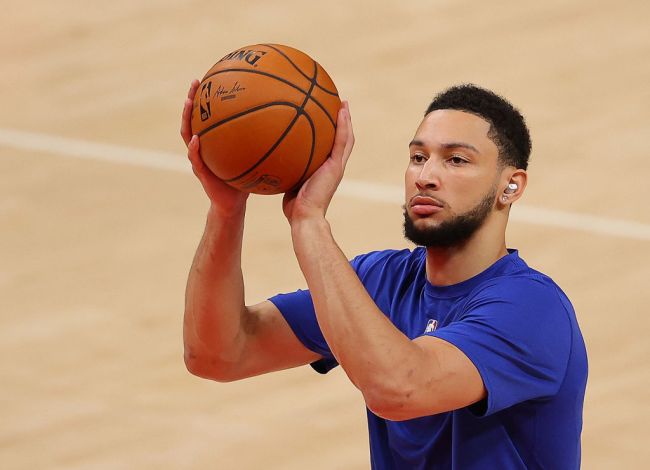 Ben Simmons showed up to Sixers practice on Monday but looked like he’d rather be anywhere else on the planet than on that basketball court. After a summer full of drama and Simmons wanting a trade out of Philadelphia, it wasn’t a surprise to see him, let’s say, less than engaged at practice, but even this was beyond anyone’s wildest dreams.

Simmons showed up wearing sweatpants and a cut-off hoodie. Fans also pointed out that something was hanging out of one of his pockets and were convinced it was a cell phone. It sure looked like a cell phone sticking out of his pocket, but apparently, it wasn’t.

Ben Simmons practiced with his phone in his pocket LMAO hes not even trying 😂 pic.twitter.com/jvPC6CDu9w

NBA insider Shams Charania appeared on The Pat McAfee Show on Wednesday and cleared the air on the cell phone during practice theory. According to Charania, it was actually a practice jersey hanging out of Simmons’ pocket. A practice jersey that he flat-out refused to wear.

BREAKING: "That was not a phone in Ben Simmons pants that was his practice jersey he was supposed to be wearing" ~@ShamsCharania#PatMcAfeeShowLIVE pic.twitter.com/33QvPgnSlw

After looking at the photo again, you could definitely make the case that it’s just a reflector on a practice jersey that appears to be a lit-up cell phone screen.

Still, it’s bad news for any Sixers fans that are still pulling for Simmons. He may not have had a phone in his pocket, but instead simply refused to throw a practice jersey on.

Things are unwell in Philadelphia.