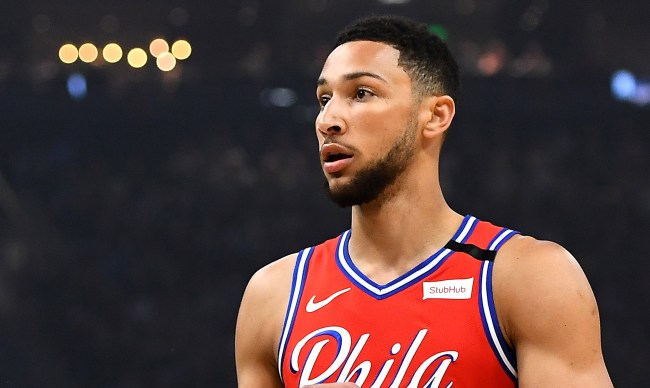 Philadelphia 76ers All-Star Ben Simmons reportedly had to undergo an MRI on Monday after injuring his back. The 23-year-old is expected to be out for an undetermined period of time due to the injury, accoring to ESPN’s Adrian Wojnarowski.

Simmons, who played in the NBA All-Star game two Sundays ago, missed Thursday’s game versus the Nets, played just four minutes in Saturday night’s loss to the Bucks and was held out of Monday’s game against the Hawks, has been under fire from Sixers fans for missing games following the All-Star break.

This has apparently not been sitting well with the two-time All-Star’s very vocal sister Liv Alice Simmons as she went OFF on a profanity-laced rant on Twitter, ripping fans who have been complaining about her brother being hurt.

“This is bigger than basketball. Some of u fucktards need to be nicer to my brother you’re assholes,” Liv began her rant on Twitter.

This is bigger than basketball. Some of u fucktards need to be nicer to my brother you’re assholes. https://t.co/PE98qSNYI1

I’m sick of it. People think they can talk to me crazy. No morherfucker I’m the crazy one and you’ll learn. I’m not employed by anyone but myself & The only people I owe are my daughter, my man, my agency and my family.
I’m 28 bens younger than me get off it u fucken losers.

You and your lady standards can go to lady hell and suck my lady balls. Bye https://t.co/vCft0ACUZq

Okay guys. I’ve had a great day educating people, clapping back, cooking meals, working out and being so productive. I hope you all have a great week but for the assholes I hope you get uncontrollable Diarrhoea in your car on the way to work in peak hour traffic.
MWAH 😘

As for when Ben will actually be back in the Sixers’ lineup, “I don’t know,” 76ers coach Brett Brown said before Monday night’s 129-112 win over the Hawks. “It really is kind of, like, how long is a piece of string? Who knows? Who knows? Whatever the time equals on days, games, period of time, then we can talk more honestly as this thing shakes out. But as it sits right now, that’s how I see the world.”