Benches Clear Between Mets, Cardinals After Nolan Arenado Nearly Gets Plunked In The Head 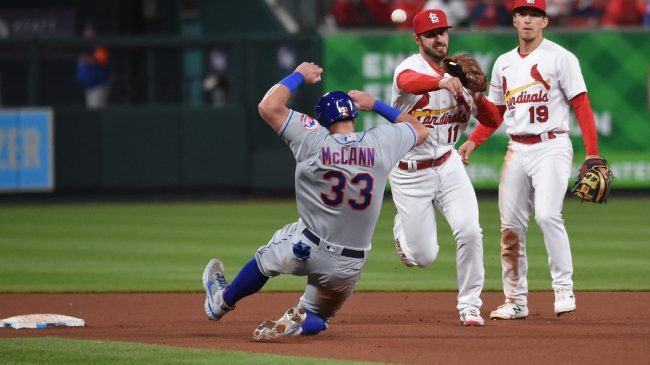 The series between the Mets and Cardinals has been HEATED.

The two sides made headlines on Tuesday with a number of New York players being plunked by Cardinals pitchers. One was Pete Alonso, who was drilled in the head late in last night’s contest.

The Mets have grown frustrated as they’ve been hit by more pitches than anyone else in the Majors. Alonso, in particular, has been hit in the head twice.

Many blame the baseballs, while others note that pitchers are more worried about velocity than control.

Tensions finally boiled over in Wednesday afternoon action as New York retaliated against St. Louis with some chin music of their own.

With the Mets trailing 10-5 in the eighth inning, hitter JD Davis was hit in the foot, marking the 19th HBP for the team on the year. The next frame, a New York pitcher took the moment to get a little revenge on the Cardinals. He sent high heat the way of St. Louis third baseman Nolan Arenado, nearly connecting with the slugger’s head.

The pitch sent Arenado backpedaling from the batter’s box, with a few words for his counterpart quickly following.

Mets go up and in on Nolan Arenado and benches clear pic.twitter.com/pwJo5Qrfsc

Arenado didn’t appreciate the up-and-in fastball, and he quickly spouted off at pitcher Yoan Lopez. Arenado then took a few steps to the mound before players on both sides came storming from the dugouts.

The third baseman kept yelling, “Do it again,” as the two sides pushed and shoved around home plate.

The tussle ensued for a few moments before the field was cleared for play to continue.

Arenado Gets Ejected but Cardinals Land the Win

After the two sides separated, Arenado was ejected.

Outside of the dismissal, he had himself quite the day, reaching base four times and driving in three runs. Interestingly, Yoan Lopez was allowed to stay in the game. He was seen high fiving a few teammates after retiring the side.

When all was said and done, St. Louis walked away with a 10-5 win in the series finale. These two teams will meet again in mid-May.