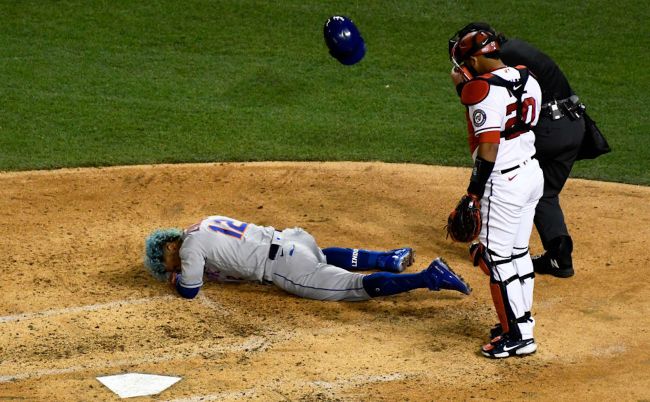 As a New York Mets fan, the early part of the season is usually the most enjoyable as the team is notoriously fast-starting. The flip side of that coin, though, is that they’re also infamous for their late-season collapses, too.

This year, however, seems a bit different. Hopefully. Famous last words, am I right? 19 games into the season, and the Mets have the best record in Major League Baseball, as they currently lead the NL East at 14-5. They’re third in batting average, third in RBIs, third in ERA, third in stolen bases, first in hits, and first in strikeouts. The team legitimately looks good. They also, however, lead the league in a far less glamorous stat: hit by pitch (HBPs).

The Mets currently lead the majors with 18 hit-by-pitches this season, with three of them coming in Tuesday night’s win over the St. Louis Cardinals. One of those wayward pitches struck Pete Alonso in the head, although the slugging first baseman was ultimately, and thankfully, alright.

Pete Alonso is hit on the helmet and the Mets are not happy one bit. pic.twitter.com/Kh88hgCuKJ

Speaking to reporters after the game, Mets starting pitcher Chris Bassitt ripped the MLB for having a “very big problem” with its “bad” baseballs.

“It’s extremely annoying to see your teammates constantly get hit, and if you get hit by certain pitches it is what it is, but to get hit in the head the amount that we’re getting hit is unbelievable,” Bassitt said. “I had some close calls tonight, and I’ve been hit in the face [by a line drive] and I don’t want to do that to anybody ever, but MLB has a very big problem with the baseballs. They’re bad. Everyone in the league knows it. Every pitcher knows it. They’re bad.”

The Mets will look to extend their league-best record as they close out their series in St. Louis on Wednesday at 1 p.m.