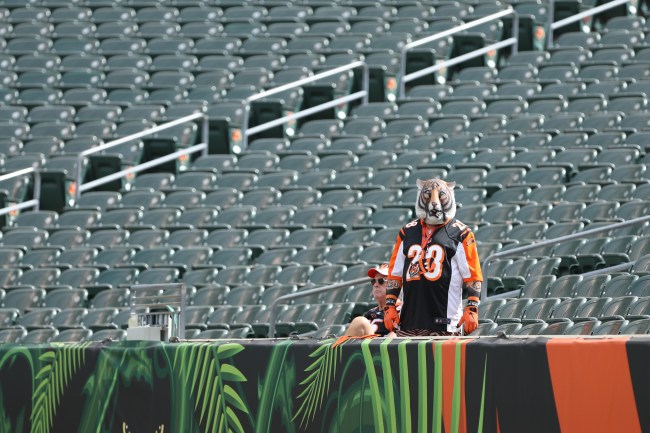 The diehard Bengals fan and owner of the Hog Rock Cafe in Milan, Indiana will need the all of Mother Nature’s cooperation as he lives in a flimsy tent on a roof until the Cincinnati Bengals win a professional football game.

Camping for Victory: Local man will live on roof of his restaurant until Bengals win: https://t.co/qt0NlUdILB

This week, we reported that Lanham, fueled by a drunken bet with friends, is following the footsteps of former WEBN sports broadcaster “Wildman Walker” who lived on a billboard for 61 days before the Bengals won a game in 1991.

Lanham’s tent is stocked with a heater, air mattress, phone charger, and a table and chairs setup. Seems legit for a night, but considering how bad the Bengals are, this setup could become an issue when the winter winds roll in.

Thankfully, the fine folks at Campbells have taken it upon themselves to do the Lord’s work by sending him a loaded pallet of of Campbell’s Chunky Soup to be his companion during those cold, lonely nights that will inevitably creep into December.

We love your commitment, Jeff, but you might get a liiiittle cold up there. Be on the lookout for this pallet of @CampbellsChunky Soup, heading straight to @HogRockCafe this Sunday https://t.co/w7Bo3BoXru pic.twitter.com/z4jT1x96vH

This is a huge win for a previously hopeless fan who won’t likely see another one until after Thanksgiving. If at all.