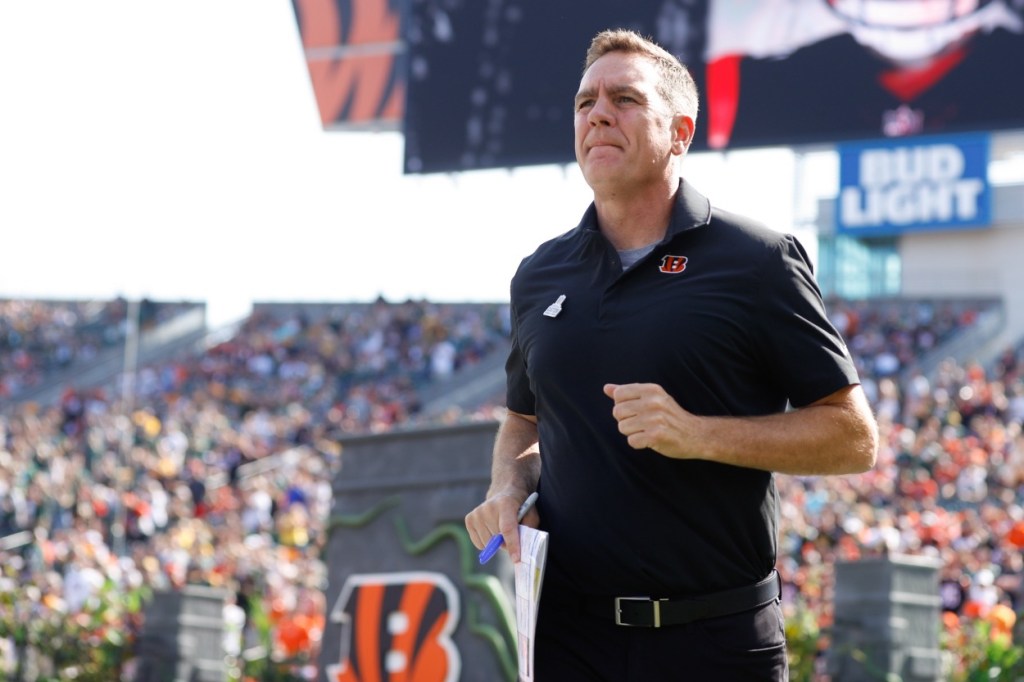 The Kansas City Chiefs are 8-2 in the NFL Playoffs with Patrick Mahomes at quarterback. In those 10 games, Mahomes has thrown for 3,106 yards and 25 touchdowns (5 interceptions). He’s an absolute force to be reckoned with but Mahomes and the Chiefs have lost to Tom Brady twice in the playoffs. Brady beat Mahomes 37-31 in the 2018 AFC Championship Game and the Bucs absolutely dominated the Chiefs 31-9 in Super Bowl LV in Tampa.

So there’s evidence the Kansas City Chiefs are beatable. All it takes is either Tom Brady, a masterful plan, or both. Cincinnati Bengals defensive coordinator Lou Anarumo believes he’s devised the perfect plan to beat the Chiefs. The Bengals did beat the Chiefs once this month already (January 2nd) when Joe Burrow threw for 4 touchdowns in a 31-34 win in Cincinnati, but this game will be at Arrowhead.

Speaking with the Bengals’ in-house reporter, Jake Rice on Bengals.com, Lou Anarumo shared his plan to beat Kansas City and it’s so simple it just might work. The plan? Force the Chiefs to score fewer points than they normally would! Here’s what the plan is…

“We cannot allow touchdowns. We’ve got to make them kick field goals.

You want to do a great job in limiting yards, but at the end of the day, limit the points, win the game. How do you do that? You do that by playing great red-zone defense, taking possessions away from them on takeaways. We have to do that this weekend to give us a chance to be successful.”

Lou Anarumo went on to discuss how he believes the recent familiarity between the two teams is an advantage he can lean on:

“You get a chance to have a feel for, ‘Hey, this is what these guys are really all about,’ as opposed to a team you don’t play once every four years or so. So we have that going. I think that’s the biggest thing. They know us, we know them, and then see what worked, what didn’t work in the first game and kind of, have some change up as we go into it.”

Stopping Patrick Mahomes and Tyreek Hill from scoring touchdowns is a TALL TASK but Tampa Bay did it masterfully in the Super Bowl.

One thing you heard the Tampa Bay players talk a lot about after winning the Super Bowl last season is how the team felt ‘like a family’ and there was a ‘family’ atmosphere in the locker room. Lou Anarumo echoed that sentiment when talking about this year’s Cincinnati Bengals with Jake Rice of Bengals.com

‘This Doesn’t Happen All The Time’ — Bengals DC Lou Anarumo

“I just think the guys are enjoying every minute of it as they should, this doesn’t happen all the time. I just think every day they’re enjoying each other. I mentioned something to them at halftime the other day. We’re a family and families aren’t perfect, and you’re going to get into arguments and there’s no family that doesn’t do that. Especially when you’re within the same four walls for basically seven months.

“Our guys have just handled all of this so well. I’m proud of them and they’re enjoying it and they should, and we get our work done and it’s a great environment. They look forward to coming to work every day. Zac (Taylor)’s done a great job of building that. We just want to keep going and keep continuing to play another day. That’s the goal.”

The Cincinnati Bengals are currently under 7-point underdogs heading into Arrowhead Stadium but Joe Burrow is pretty magical. He grew up in Ohio and the Bengals had never won a single Playoffs game in his lifetime and now they’re one win away from playing in the Super Bowl.

Burrow and Ja’Marr Chase have already connected for 1,654 Pass yards this season, the most ever by two players 25 or younger. Joe Burrow also became the first player in NFL history to throw for 1,200 passing yards, 10 passing TDs, and 0 INTs in a 3 game span according to ESPNStatsInfo:

According to @EliasSports, he’s the 1st player in NFL history with 1,200 pass yards, 10 Pass TD & 0 Int in a 3-game span, including playoffs. pic.twitter.com/gQFsxp1WIv

It’s possible that Cincinnati could beat Kansas City with nothing but the offense but the entire NFL world watched the Bills lose to the Chiefs last weekend after Josh Allen’s heroics ended with the Bills defense allowing Mahomes to score a TD in overtime. Lou Anarumo hopes Cincinnati’s defense can stop those touchdowns and only give up field goals. Easier said than done.

There’s no word yet if the Chiefs will ban Patrick Mahomes’ fiancée from the game after fans have demanded it.