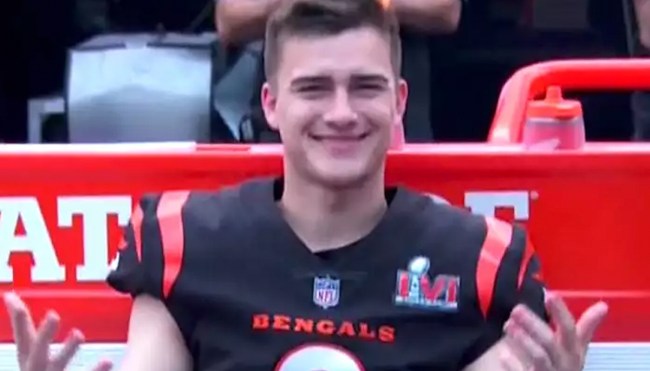 There was a fair amount of hype surrounding the halftime show at Super Bowl LVI in the leadup to The Big Game, and it’s safe to say Dr. Dre, Snoop Dogg, Eminem, and Kendrick Lamar (plus a few special guests) more than delivered with the absolutely electric medley of hits they performed back in February.

Over 100 million viewers tuned in to watch those members of hip-hop royalty do their thing in front of the more than 70,000 fans that had packed into SoFi Stadium.

However, there was also one fairly unlikely spectator who managed to catch the attention of NBC’s cameras during the show: Cincinnati Bengals kicker Evan McPherson, who opted to remain on the turf instead of joining his team in the locker room.

Evan McPherson was not missing that halftime show 🤣pic.twitter.com/x95sEzSzRa

It was kind of hard to blame the 22-year-old rookie for seizing on the opportunity to soak in the moment.

However, it also wasn’t the best look when you consider the Bengals trailed the Rams by three heading into the second half of a game they’d ultimately lose by the same margin, so it wasn’t exactly shocking to hear Cincinnati special teams coach Darrin Simmons describe the move as “a real sore subject” when he was asked about it a few weeks later.

It appears the topic is still fairly touchy based on what Simmons had to say while talking to The Athletic for an article that also features some new insights from McPherson as well as Clark Harris, the veteran long snapper who served as the mastermind behind a plan that ended up backfiring a bit.

Harris said he initially floated the possibility of watching the halftime show with McPherson ahead of the team’s AFC Divisional Round showdown with the Titans and says he regrets getting the rookie involved thanks to the fallout that ensued.

According to Simmons, the biggest issue was Harris being absent for a discussion concerning the adjustments that needed to be made to the punting unit stemming from an injury linebacker Germaine Pratt suffered in the first half:

“I just couldn’t find him. I looked all around the locker room and I can’t find him… I had to move two players and make adjustments with the punt team. I don’t have the key cog in that. That’s what frustrated me the most.”

While Simmons admits that Harris and McPherson going rogue didn’t end up having a tangible impact on the result of the game, he was also not thrilled with the “embarrassing” optics of his punter being filmed chilling on a bench during the halftime show.

McPherson did sympathize with his coach to a certain extent, as he said, “I probably wouldn’t do it again, but no regrets.”