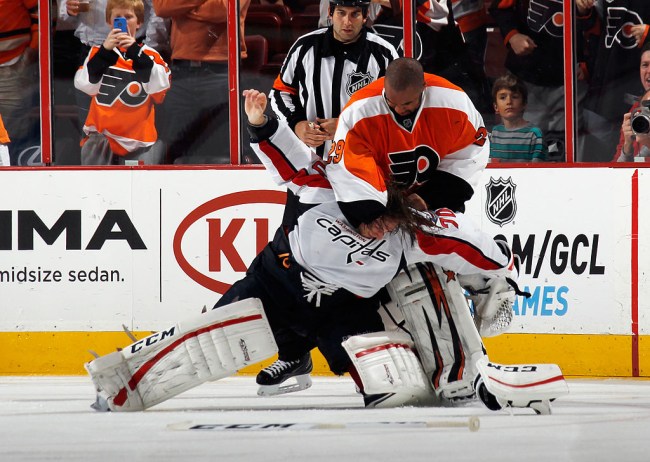 Whenever the topic of the most electric moments in sports comes up, there are some that always jump to the top of the list like walk-off homers, buzzer beaters, or game-winning field goals.

However, a video that recently popped up on my Twitter feed made me want to introduce a new dark horse candidate to this discussion: goalie fights in hockey.

During an ECHL game between the South Carolina Stingrays and the Jacksonville Icemen last weekend, the netminders decided to drop the mitts. South Carolina’s Logan Thompson traded punches with Jacksonville’s Michael McNiven while the crowd roared (I see a lot of empty seats but it’s minor league hockey in the South so I’m not sure what you were expecting).

If that wasn’t enough to at least get you thoughtfully rubbing your chin at the notion of goalie fights being the most exciting moment in all of sports, here are a few other examples for your consideration.

Ron Hextall could do it all. A solid goalie who managed to score two goals over the course of his career, Hextall is probably best remembered for his ability—and unabashed willingness—to get his hands dirty. Hexy was willing to go after anyone, and in this case, he paired up with Toronto Maple Leafs netminder Felix “The Cat” Potvin.

Like most goalie fights, this one started with a line brawl when Leafs legend Wendell Clark began beating the Flyers’ Daniel Lacroix like he owed him money. Everyone on the ice rushed in to assist—including Hextall.

Neither goalie was a stranger to fighting, as Potvin and Hextall had four and five career fights respectively and it shows. These two threw some absolute bombs at each other.

This bout also occurred right as the buzzer sounded, so you know some people who wandered out to the concourse early to take a leak or grab a Molson in an attempt to beat the crowd are still kicking themselves for missing it to this day.

It’s sometimes easy to forget that one of the NHL’s most vitriolic rivalries of the late-90s and early-2000s was between the Detroit Red Wings and the Colorado Avalanche.

Fueled by several heated meetings in the playoffs, these two teams HATED each other.

In fact, this led to two goalie fights both involving Hall of Famer Patrick Roy. It’s his one with Detroit’s Chris Osgood that we’re going to examine here.

The best part about this fight is the showmanship on the part of Roy. His posturing from center ice built up the excitement to the point where Osgood had no choice but to accept the challenge.

And accept it he did.

Both goalies held their own, with Roy especially getting in some heavy punches, but the crowd that filled Joe Louis Arena that night showed their appreciation for Osgood with a thunderous “Ozzie! Ozzie!” chant.

Also, can every fight be accompanied by Darren Pang yelling his trademark “Holy Jumpin’!” catchphrase over and over?

Sometimes one of the parties involved is less enthused about the idea of throwing down than the other. The late Ray Emery was never shy to shed his glove and blocker and attempt to break someone’s face.

With his Philadelphia Flyers getting throttled in the third period of a November 2013 game against the Washington Capitals, Emery decided to sprint down the ice and fight a very disinterested Brayden Holtby.

Who can blame Holtby for being apprehensive? Emery had already garnered a reputation for being one of the best—if not the best—fighter to ever throw on a pair of pads. The man paid homage to his favorite boxers by having them painted on his mask. Without a doubt, he was well-versed in the finer points of chucking knucks.

Razor wouldn’t take no for an answer and unleashed an unholy (and controversial) beating on the young Capitals goalie.

Brent Johnson is not exactly a household name despite having played over 300 NHL games—309 to be exact—but his career will arguably be best remembered for one punch.

It happened in a game against the New York Islanders on February 2, 2011. A member of the Pittsburgh Penguins at the time, Johnson was in net when tempers started to flare between the Pens and Isles and a scrum soon developed in the corner at the other end of the rink.

Johnson slugged DiPietro with a monstrous left hook straight to the face that broke the Islander’s jaw. Unfortunately, this injury ended DiPietro’s season. He’d play less than a dozen NHL games over the next few years and would make some stops in Europe and the American Hockey League before ultimately retiring in 2013.

The Isles wouldn’t let Johnson get away with KOing their starting goalie, however, and just over a week later, he threw down again—this time with Islanders goalie Micheal Haley, who thankfully managed to avoid getting his face broken.

We’re going to visit Ray Emery again but this time he isn’t the star of the show.

In a 2003 game between the AHL’s Binghamton Senators and Philadelphia Phantoms, a fight broke out just to the left of Emery’s net. Razor did as he was wont to do and unloaded a barrage of fists on a vulnerable Phantom.

Phantom’s goalie Neil Little charged down the ice, and while skating full-speed, dove headfirst right into the melee.

While perhaps not the most effective method, you can’t deny that Little’s Superman impression was exciting and is still a welcome addition to any blooper reel more than fifteen years later.