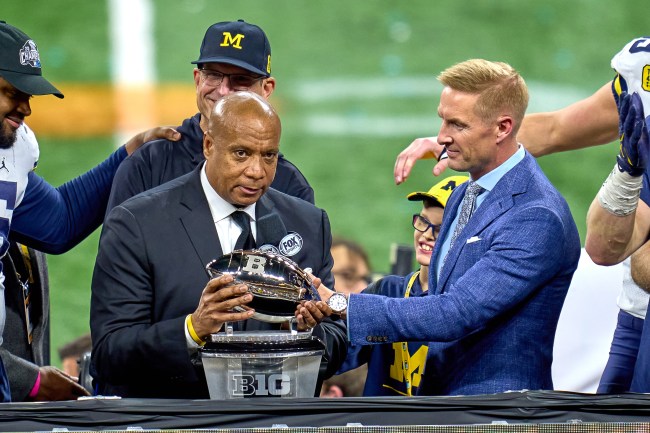 It seemed that talks of College Football Playoff expansion were heating up as this year’s iteration of the event was getting ready to kickoff. It sounded like we were headed in the direction of finally getting the change that most fans want.

Unfortunately, there has been little movement on the expansion front in the last few weeks. Now we may know why. It seems Big 10 Commissioner Kevin Warren won’t budge on one particular point.

Greg McElroy on College Football XM said that Kevin Warren is the one that is holding up playoff expansion. Warren has dug his heels in.

It feels like an odd issue for Warren to take with the parameters of expansion. There hasn’t been a single season since the start of the College Football Playoff where the Big 10’s champion would have needed an automatic bid in an expanded playoff. Every single one was a top 8 team after their win.

Warren’s stance shouldn’t come as a surprise given his recent comments to ESPN.

“I just I just feel strongly with our conference, the difficulty of our schedule, the demands of our schedule, and going back to what was developed, even originally. I wasn’t in the room, but I heard it was originally that the conference champions should be given a lot of credit, and so I’m just following that. That’s important.”

There are a couple of issues with Warren’s sentiments here. First of all, conference champions are already given a lot of credit by the selection committee. We’ve never seen more than 1 non-champ make the playoff field in a season before.

Second, he cites his conference’s schedule difficulty, but their scheduling would all but guarantee one team in the field of 8 and could get them a second without Power 5 auto-bids. Those auto-bids (and the one you’d have to give to the group of 5) would make it tough or the Big 10 to get a second team in.

For example, if there were 6 auto-bids this season, Baylor and Utah would have made the field while Ohio State was left out. Michigan was getting in whether their bid was automatic or not.

Warren should really reconsider his stance here. Expansion is what’s best for college football as a whole and should work out quite nicely for the Big 10 in any form.