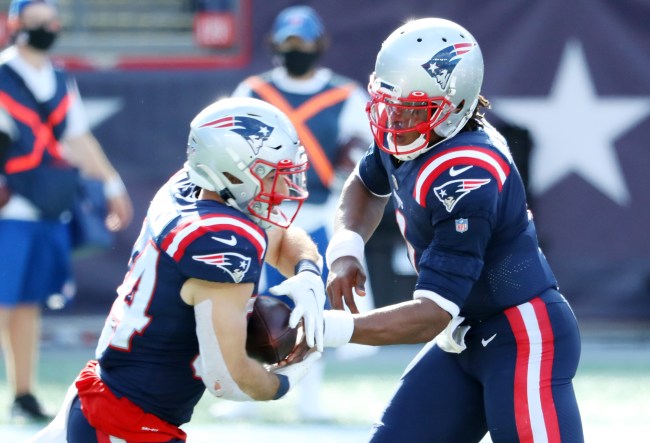 There were some interesting storylines in Week 1 for sure. The New England Patriots appeared to already be in mid-season form with Cam Newton at quarterback. Cam got heated and physical with some Dolphins players after his chain got snatched after the game. Tom Brady’s start for the Tampa Bay Buccaneers could’ve gone a lot better. Brady threw 2 INTs and the Bucs lost 23-34 to the Saints who are expected to win the NFC South. Bucs’ head coach Bruce Arians was brutally honest about Brady’s performance. But we’re here to talk about gambling, aren’t we?

The Patriots were -7 favorites against the Dolphins. That line seems pretty soft in hindsight but it was heavily influenced by nobody knowing what Cam Newton would bring to the table for New England. The Pats won 21-11 and covered. Our in-house expert went 4-0 on his ‘Best Best of Week 1‘ and one gambler at BETMGM cashed in on one of those, the Raiders-Panthers Over/48. Three huge bets brought in from BETMGM included:

And some of the biggest *LOSING* bets from BETMGM included:

The Patriots covered and that gambler cashed in HUGE. The Lions threw their lead away against the Chicago Bears and destroyed the hearts of every Lions fan (again). Chicago put up 21 points in the 4th Quarter to rally for the win and that gambler who took the Lions at -2.5 slowly watched his $175,000 wager disappear.

$110,000 on the Raiders-Panthers Over/48pts proved to be a great bet. One featured in our Best Bets of Week 1 roundup.

Tom Brady was 30-to-1 to score the first touchdown in the Bucs-Saints game which was a prop bet that paid out but also one a lot of people didn’t even consider because of Brady’s speed or lack thereof. Ezekiel Elliott was -160 to score a touchdown at any point in the game which was easy money. You knew he was getting in the endzone at some point.

Sportsbooks were very happy with a Rams win over the Cowboys:

Some other big bets over the weekend included this outrageous college parlay:

Another big bet at @BetMGM

This is straight-up hilarious because nobody in their right minds would’ve ever considered playing this:

A $10 parlay on Josh Allen, Cam Newton, Tom Brady and Joe Burrow to score the first TD would have won…

If you want to get in on the Week 2 action, just follow that link to BETMGM below!