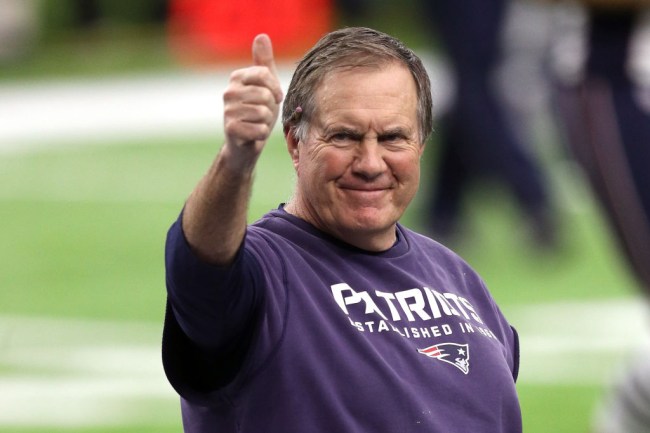 If you haven’t been paying attention over the past couple of decades, you should know the New England Patriots are very good at football thanks in no small part to a guy named “Tom Brady” but it’s impossible to talk about the team’s success without mentioning the man who’s been at the helm since the franchise took home its first Super Bowl: Bill Belichick.

Belichick bounced around the league a bit before Robert Kraft tapped him to replace Pete Carroll, and while he had an underwhelming first season, he (with the aid of Brady) helped reverse New England’s fortunes the following year and the team has never looked back.

On Sunday, Belichick had the chance to earn his 300th victory as a head coach and did exactly that by beating the Browns, who did him a few favors to help him reach the milestone.

After the win, Robert Kraft presented Belichick with the game ball and lauded him with praise, and while the coach is notably not a fan of pomp and circumstance, he seemed to appreciate the gesture based on the rare smile he cracked.

Here’s what Kraft had to say:

“We don’t give game balls out without it being a special milestone. I want you to know [on] September 8, 1991, [Belichick] came to Foxborough to coach the Cleveland Browns against the New England Patriots.

He won his first game as a head coach and 28 years later he’s coming back to this same location and winning his 300th game—only the third man in the history in the 100 years of the NFL to do that and I’m happy, as we all are, that 263 of those 300 has been as coach of the New England Patriots.

And I’m especially happy that 299 was against the New York Jets.”

Belichick also had jokes after the game when reflecting on his career.

Belichick on 300 career wins: "Fortunately I didn't play in any of those games. That's a good thing for us." 😂 pic.twitter.com/wjpl18Vlyt