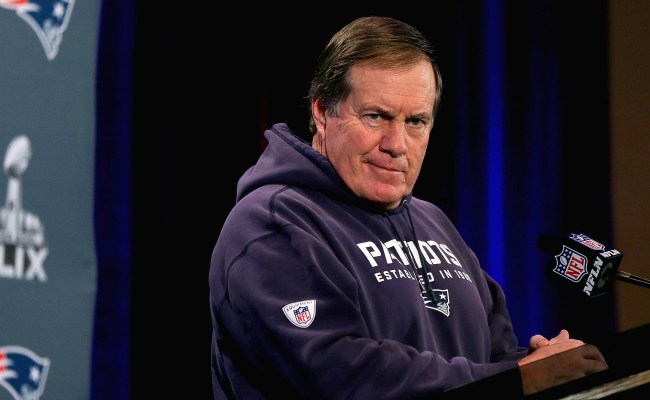 New England Patriots head coach Bill Belichick is notorious for the lack of effort he gives and the complete disdain he shows when he is forced to speak to the media. This we all know.

However, there is one aspect of The Hoodie’s press conferences that many of us have overlooked, and once you see it, a light bulb will go off because it was always there right in front of our eyes the entire time.

It doesn’t matter if there is a single microphone or multiple on the podium, Belichick is going to adjust them.

He especially doesn’t seem to like it when they are pointing directly at his face, which, you know, is kind of the whole of them being there.

Is this some kind of nervous habit? Is it yet another one of his alpha personality power moves? Or does Belichick just really hate microphones so much that his immediate response when he sees one is to attack it?

These are the kind of questions that get asked when it’s a slow news Friday in the middle of winter as we impatiently wait for kickoff in the NFL Divisional Round.

Another astute observation to come from this video compilation by @EJDeveau is the fact that in most cases Belichick sighs after each adjustment of the microphone because he’s anticipating being asked something he thinks is stupid.

Watch and be mesmerized…

He knows exactly where to place them for optimal sound recording due to his decades of placing hidden mics is the opponent's locker room.

I don’t see anything wrong with this. The man just wants his mics set consistently at a 46.725 degree angle for the most optimal responsive conditions. Why can’t they get it right?

That assessment actually probably isn’t too far off.