Bill Belichick Calls B.S. On Report Claiming He Stiffed Tom Brady After He Signed With The Bucs 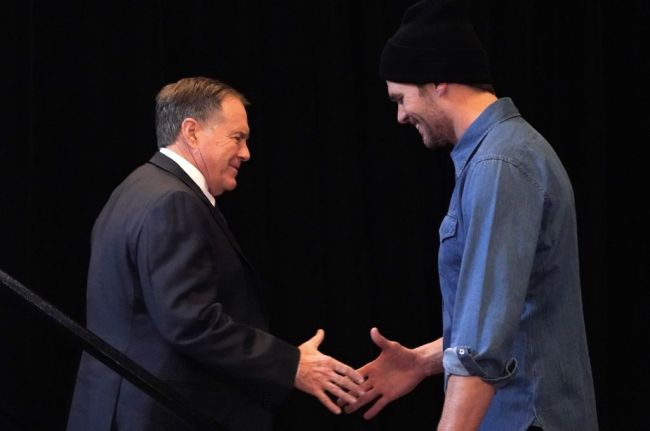 TIMOTHY A. CLARY/AFP via Getty Images

In promotion of ESPN Senior Writer Seth Wickersham’s new book, It’s Better To Be Feared, ESPN pushed out some dramatic tidbits highlighting the turbulence of the Brady, Belichick, Kraft era.

The biggest victim of the piece was unquestionably Bill Belichick, who Robert Kraft allegedly called an “idiot savant” and “the biggest a**hole in my life,” both behind his back, while also painting the legendary coach as petty in the wake of Tom Brady jetting for Tampa.

In the end, Tom Brady just wanted to say goodbye — in person — to his longtime coach. But according to a new book to be published next month, Bill Belichick said he wasn’t available and insisted the two New England Patriots legends talk on the phone.

During a press conference Wednesday, Belichick was asked about the contents of the book, which he, Kraft, and Brady all declined to be interviewed for and is “based on hundreds of interviews with a range of sources, including previously confidential emails, texts, game plans, scouting reports and internal New England studies.”

“No, that’s not true. There are a few things about this book; it sounds like it’s a lot of second-, third- and fourth-hand comments. I’m not going to get into that. I’m going to focus on this game and try to prepare for the Bucs.”

In the lead-up to Tom Brady’s highly-anticipated return to New England on Sunday Night Football, Belichick praised his former quarterback as “tough as any quarterback there is or ever has been.”

“Nothing Tom does surprises me,” Belichick said. “He’s a great player, works hard, takes care of himself. He’s talked about playing until 50. If anybody can do it, he probably can.

“He’s about to pass the all-time passing record. He’s done more than any other player at that position in whatever measurement you want to take — whether it’s yards, completions, touchdowns, championships, you name it. Put anything out there that you want; it doesn’t get any tougher than that.”

Jim Holzman, the owner of Massachusetts-based Ace Tickets, claims the average ticket for Brady’s return to Gillete was selling for $1,600, the biggest regular-season ticket in history.