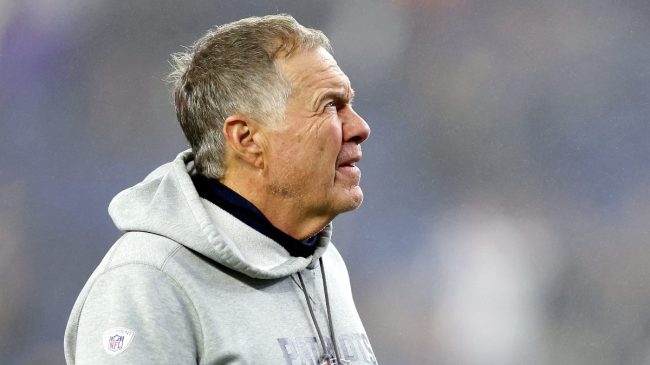 We might have some drama going on with the New England Patriots right now as there is a mix of reports surrounding the organization. First, Bill Belichick shocked everyone after benching Mac Jones for Bailey Zappe early on. From there, players chimed in to claim they didn’t know the quarterback change was going to happen. Now, Belichick is at odds with his team.

It was initially reported that Patriots players were not aware of the quarterback game plan. Rhamondre Stevenson confirmed that by stating, “No. We weren’t aware,” per Kevin Patra. Even Jakobi Meyers expressed his confusion about Bill Belichick’s plan.

However, according to Mike Giardi, the Patriots’ head coach is humming a different tune. He’s claiming his players did in fact know the game plan as he states, “there was no lack of communication.” New England’s head coach doubles down by saying he “spoke wot the leaders on the team about it beforehand.”

"There was no lack of communication." – Belichick (to @weei) when asked if there was a communication breakdown after a number of players said they didn't know there was going to be a two-QB system last night. Said he spoke to the leaders on the team about it beforehand. #Patriots

Either Bill Belichick is lying or the leaders on the team didn’t pass the message along. It’s extremely odd to see the Patriots spun around like this, as Belichick’s players are typically some of the most well-coached individuals in the league.

To make matters worse, there still isn’t a clear-cut answer on who will be the starting quarterback for the Patriots moving forward, per Mike Giardi.

“We’ll do what we think is best for the football team.” – Belichick when asked if they saw enough last night to determine who the QB is for the #Jets game.

We’ll see how this situation unfolds as the players are saying the exact opposite of what Bill Belichick claims. Keep an eye on Mac Jones and Bailey Zappe, as the Patriots certainly have some difficult decisions to make.