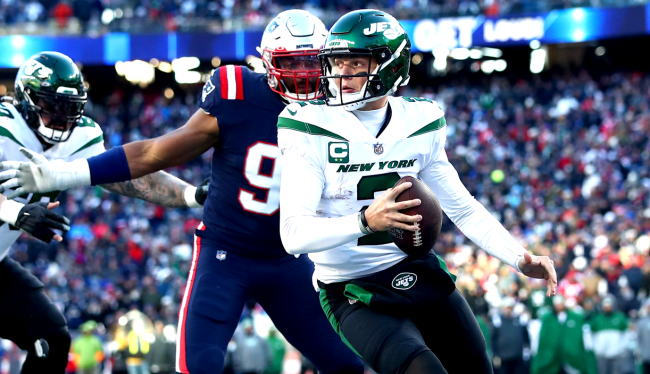 New York Jets quarterback Zach Wilson has found himself as the pariah of the National Football League this week, as the second-year signal caller is currently receiving criticism from virtually all angles: fans, analysts, players, and even rival coaches.

Following the Jets’ 10-3 loss to the New England Patriots on Sunday — which saw the offense have more punts than completions — Wilson brutally stuck his foot in his mouth when he bluntly told reporters that he didn’t feel as though he let the defense down.

The fallout from Wilson’s comments has been pretty seismic. Jets fans are ready to ship him out of town while ESPN analysts are questioning whether he knows the playbook and accusing him of lacking accountability because he came from money. Even Jets’ head coach Robert Saleh seems to be distancing himself from the QB, as he revealed on Monday that he wouldn’t commit to Wilson as the team’s starter for this weekend’s game against the Chicago Bears.

Perhaps the biggest instance of disrespect that Wilson has received, though, comes courtesy of New England Patriots head coach Bill Belichick, who revealed that he used some of their Week 10 bye week to prepare for their Week 12 game against the Vikings instead of their Week 11 matchup against the Jets. Yikes.

So… Belichick wasn't that worried about Zach Wilson and he already started making preparations for the game after the #Jets two weeks ahead of time. https://t.co/HabpDpRi5m

Heading into Week 12, the 6-4 Jets currently find themselves on the outside of the AFC Playoffs, as they trail the Cincinnati Bengals for the 7th and final seed. To close out the 2022 season, Wilson and the Jets will face off against the Chicago Bears, Minnesota Vikings, Buffalo Bills, Detroit Lions, Jacksonville Jaguars, Seattle Seahawks, and Miami Dolphins. In addition to their playoff bid, these final seven games of the Jets’ season also feel as though they’ll be used to make a decision on Wilson’s future with the team.