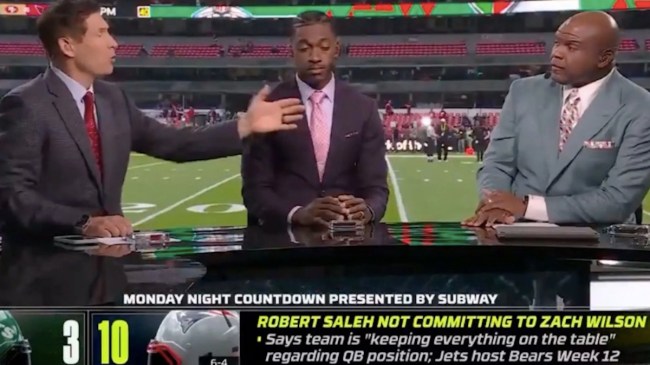 Unfortunately for New York Jets quarterback Zach Wilson, he currently finds himself as public enemy #1 in the NFL world in recent days following his pitiful outing against the Patriots and even poorer performance at the mic during the postgame press conference.

When asked whether or not he let the defense down following Sunday’s 10-3 loss to New England — which saw the Wilson-led offense have more punts than completions — Wilson responded with a simple “no.” That “no” and surrounding attitude, according to reports, has rubbed some players in the Jets’ locker room the wrong way.

NYJ players aren’t the only ones turned off by Wilson in recent days and weeks, as fans and analysts alike have been cooking the former BYU product all week. ESPN analyst Dan Orlovsky, for example, isn’t even sure if Wilson knows the entire playbook.

Orlovsky’s colleague Booger McFarland also flamed Wilson, however, McFarland’s criticism was a bit more personal as he harped on the fact that Wilson came from money.

Hall of Fame quarterback Steve Young seemed to agree, though, telling McFarland that his logic “doesn’t resonate at all” because Wilson is a “tough-minded kid.”

Steve Young took issue with Booger McFarland saying Zach Wilson "grew up with a lot of money" and hasn't "had to accept accountability."

Despite Young’s attempt to save face for Wilson, his play, his attitude, or both have clearly caused head coach Robert Saleh to reevaluate as he told reporters on Monday that he’s not committing to Wilson as the team’s starter this weekend against the Chicago Bears.

With seven games left to play in the 2022 season, the Jets currently find themselves on the outside looking into the AFC Playoffs as they trail the Cincinnati Bengals for the 7th and final seed.