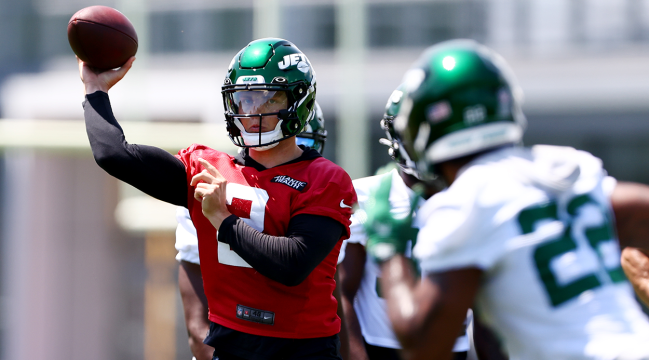 It’s a Monday morning in New York City and Zach Wilson may be Public Enemy #1 following an offensive performance from the New York Jets that saw the team have more punts than completions.

Making matters worse for the Jets and their fans, though, is the fact that Wilson is not only clearly not cut out to be a starting quarterback in this league, but his attitude appears to be that of a selfish and entitled player, which is perhaps the worst thing you can be when it comes to TEAM sports.

While we’ve already brought you stories about how Wilson’s postgame unwillingness to take responsibility for the offense’s struggles, this latest indictment of the former BYU signal caller has more to do with his on-the-field play.

In one of his typically detailed breakdowns, NFL analyst Dan Orlovsky broke down a play from Sunday’s game against the New England Patriots in which he literally questions whether or not Wilson knows the play.

Does the QB know the playbook @nyjets ?? pic.twitter.com/T8kUbYUcSD

Wilson’s mighty struggles also put head coach Robert Saleh in a difficult position as he previously claimed (just a month ago) that only injury would remove Wilson from the line-up. The problem with that, though, is that the Jets aren’t some taking football team looking ahead next sason — they’re 6-4 and are currently in the midst of the AFC Playoff race and are CLEARLY being held back by their quarterback.