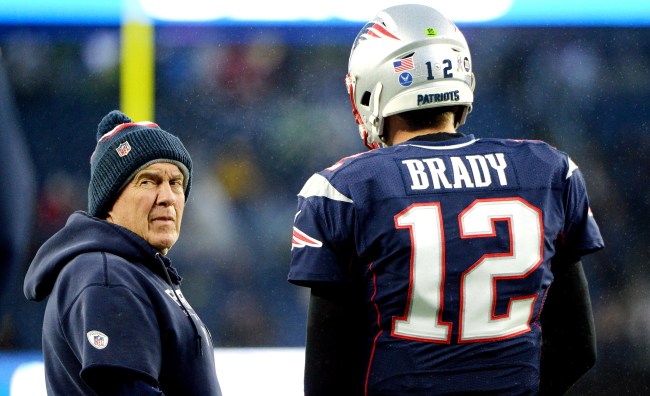 Tom Brady and the Buccaneers travel to New England on Sunday for what will be Brady’s first game back in Foxborough since leaving the franchise. To say this matchup is highly anticipated is an understatement, which is apparent given the media has been hyping up this game for well over two weeks now.

We’ve already heard from Tom Brady Sr. and Brady’s longtime trainer Alex Guerrero about Brady’s return and the Brady-Belichick split, but now the head coach himself has started to weigh in about the situation.

While doing his weekly interview on ‘The Greg Hill Show‘ on Monday morning, the conversation with Belichick quickly shifted from the Pats’ loss to the Saints to Brady coming back to town.

Belichick was asked the simple question of whether or not he was hoping for Brady to re-sign with the Patriots after the 2019 season, and he gave an honest and candid answer.

“Yeah, well I think we’ve been through all the dynamics of that. There were a lot of things there that … he looked at his options and made his decision. We weren’t as good an option as Tampa, so I mean, you’d have to ask him about all of that,” Belichick said. “But that’s really … it wasn’t a question of not wanting him. That’s for sure.”

“Tom and I had a, I feel like a good relationship and a lot of production, obviously, while we were together. And I enjoyed coaching Tom, and he was a great player for us,” Belichick continued.

There are certainly no lies in Belichick’s comments here, but it’s still interesting for him to flat-out say that Tampa Bay was a better option than New England given all that the duo had been through at that point.