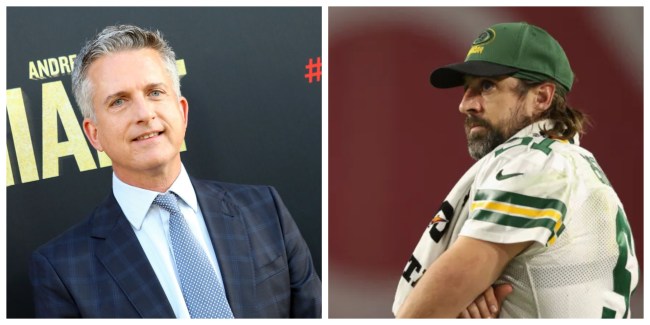 Aaron Rodgers is set to miss the Packers’ matchup against the Chiefs this Sunday after testing positive for COVID-19. Shortly after that news broke, it was reported that Rodgers is unvaccinated, which sent social media and the sports world into a frenzy.

While many prominent media members were critical about Rodgers’ status, Bill Simmons may have been the hardest on the Green Bay quarterback.

Simmons joined Colin Cowherd on ‘The Herd‘ and eviscerated Rodgers calling him both a diva and a narcissist.

“I think Rodgers is a diva. I think he’s been a diva the last couple of years,” Simmons said. “I think the way he handled this offseason was very diva-ish. He didn’t seem like a team-first guy to me. I didn’t understand it. I didn’t understand why he chose the week of the NFL Draft to blow it up into an even bigger story.”

Simmons made it clear that he thinks Rodgers not being vaccinated is just the latest example of his narcissistic tendencies. He also decided to randomly take a dig at Rodgers for not getting the ‘Jeopardy!’ hosting gig.

“This ‘woe is me’ stuff, I’m going to go even deeper, I think sometimes people get weird when they get older. … Sometimes people who are single start to become a little narcissistic and they start seeing everything through this lens of ‘me, me, me, me.’ What about me? Everything’s about me.

To me, he just seemed like a classic narcissist the last year where everything was somebody else’s fault,” Simmons explained. “He took no responsibility. He honestly thought he was going to be the ‘Jeopardy!’ host, which was insane. They were never making him the ‘Jeopardy!’ host.”

One of the added wrinkles in the Rodgers vaccine controversy is his previous statements about being vaccinated.

Earlier this offseason Rodgers was asked if he had been vaccinated and said that he had been “immunized.”

Green Bay Had Been Aware Of Rodgers’ Unvaccinated Status

The Packers have been aware of Rodgers’ unvaccinated status. Rodgers reportedly did have an ‘alternate treatment’ earlier this year and hoped that it would give him full vaccination status in the eyes of the NFL, but that wasn’t the case.

“Rodgers petitioned the NFL to have an alternate treatment that he underwent before he returned to the Packers that would allow him to be considered the same as someone who received one of the approved vaccinations, sources told ESPN. After a lengthy back and forth, the league ruled that Rodgers would not get the same consideration and would be considered unvaccinated.”

Rodgers could return for Green Bay’s matchup with Seattle next Sunday if he follows the league’s guidelines and returns a negative test following his mandatory isolation.