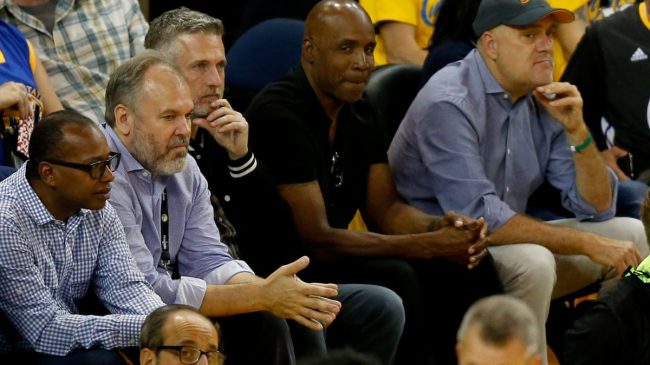 Bill Simmons has long been a Boston Celtics backer, taking every chance he can to build up the C’s on this recent run to the NBA Finals.

Boston jumped out to a 2-1 lead, with a chance to go up 3-1 in The Garden. Golden State was able to steal a win on the road, though, beginning a three-game streak that helped them close out the Finals with a championship.

The win gives the Warriors four titles in the last eight years, easily making them the most dominant team of the era. Throw in that they’ve appeared in six of the last eight Finals matchups, while playing in the much more competitive Western Conference, and it solidifies their standing as a dynasty.

In a recent Twitter post, the Boston supporter says that Golden State hasn’t earned that status yet.

He says that the word gets thrown around too liberally, but winning four championships in less than a decade has to come with some merit.

Simmons calls that merit a “dynastender.”

NBA fans were quick to call Bill Simmons out for his hot take on the Warriors. Most believe that Golden State should undoubtedly own the dynasty tag.

nah this is crazy hate 😂 both teams mentioned are dynasties, meanwhile boston has only won by five since the merger and before 08 it was an 18 year drought

This is a terrible take. It’s not just 4 titles in 8 years, it’s also 6 finals appearances, it’s the knowledge that they would’ve won a 5th (against Toronto) if not for injuries, it’s tying the record for the best regular season ever, & it’s changing the way the game is played.

6 appearances and 4 chips in 8 seasons and the only two you missed were when Klay was sidelined. If that’s not a dynasty, I’m not sure what is. What’s the bar here? Maybe take homerism out of the analysis next time

Boss, the @warriors have been to 6 NBA Finals in the last 8 years… This is an absolutely terrible take. Before KD, with KD, and after KD… Steph, Klay & Dray have the most NBA Finals wins out of any trio in NBA history. The Warriors are a dynasty, how can they not be?

Some believe that Simmons is more upset at the Celtics for blowing the series, and he’s taking it out on the Warriors as a result.

This is the best you can do? You sound like Mike Francesa after a Yankees WS loss.

You are entitled to your opinion, but it is wrong.

The Warriors over the last eight seasons have set an NBA regular season win total, made numerous Finals appearances, and changed the way that the game is played at the professional level. And now, they’re a four-time champion.

Think that definitely qualifies as a dynasty.