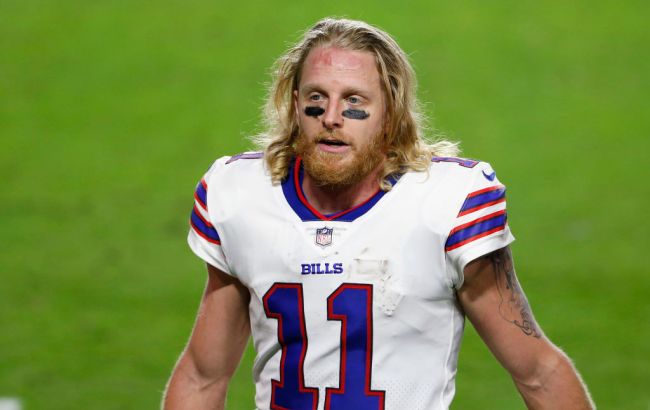 Dr. Anthony Fauci made the announcement on Thursday explaining that he’s now okay with fully vaccinated people not wearing masks outside. Many people have made that decision on their own, but for those out there still looking for the green light from Dr. Fauci, Thursday’s announcement was a relatively big one.

Buffalo Bills wide receiver Cole Beasley isn’t someone that was waiting on Dr. Fauci’s announcement in order to not wear a mask while outdoors.

Beasley tweeted that he doesn’t bother wearing a mask outside while not being vaccinated. He sarcastically asked if that was illegal given the latest update, taking a dig at Dr. Fauci.

I do that without being vaccinated. Is this illegal now? https://t.co/LvWSwEfoAK

As you would expect, plenty of people came at Beasley in the replies. Mike Tanier, a sportswriter for Football Outsider and the New York Times, decided to take a shot at Beasley suggesting that his behavior of not being vaccinated and not wearing a mask outside would somehow cause a COVID outbreak causing the Bills to miss their entire Super Bowl window.

Tanier coming up with that wild scenario because Beasley isn’t vaccinated and doesn’t wear a mask outdoors should tell you all you need to know about a vast majority of the media out there. Tanier took his swing, but it didn’t connect, Beasley won the battle.

I could miss the super bowl without getting COVID just because my contract tracer showed I was near a person who tested positive for longer than 10 min. Even if I’m wearing a mask around them. And then that test could turn out being a false positive later. https://t.co/Mwb2lpzW59

Until we all share the same opinion or belief we are considered ignorant. I don’t understand. You feel how you feel and I respect that. It doesn’t always make me wrong or a bad person cause I don’t agree with you.

It’s worth noting that Bills GM Brandon Beane recently made a comment saying he’d consider cutting a player that wasn’t vaccinated, and that it would be an ‘advantage’ to be able to do so.

Tanier wasn’t the only one that took a shot at Beasley for his tweet. Here are just a few of the replies that stand out:

Welp. With that kinda entitled piss poor attitude, guess I can stop following you. 🤷🏿‍♂️

It's more for the safety of other people. I'm vaccinated but I still wear a mask when I'm outside but around people. It's all about unity, man. Mild inconvenience but that's all it is

Millions have died. Get vaccinated and stop being insensitive

You’re smarter than this. I’m vaccinated so I can safely be in a crowded stadium to see you play. Don’t be the the anti science guy who exposes his teammates and staff to a deadly virus they can then pass on to vulnerable individuals

Beasley admitting to not wear a mask outside won’t solely be a story on Twitter, many members of the press and certain sports websites will drive this story into the ground while trying to eviscerate the wideout. Given how Beasley has dug his feet into the ground behind his statement, I wouldn’t expect him to cave in and issue some sort of apology, but in today’s world, who knows?