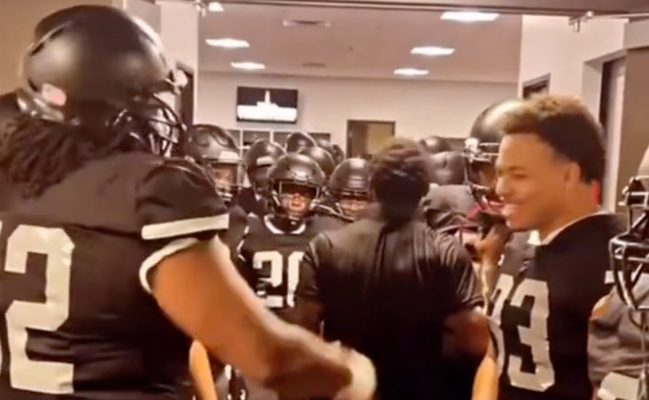 Bishop Sycamore High School might not be real, but its football team played a real game against IMG Academy. There are a lot of questions surrounding the program and even Ohio’s governor has asked for an investigation into its legitimacy.

It’s the wildest story in sports at the moment and you can click HERE to get everything you need to know about what’s going on.

However, regardless of what is to happen in the future, the past cannot be erased and the game on Sunday was played. Prior to facing the nation’s No. 2-ranked team on national television, one of the team’s coaches gave a speech about being ready to kill.

And then Bishop Sycamore proceeded to lose 58-0 in bizarre fashion.

As you can see from the video, some of the players don’t look they belong on the field with high schoolers. Look at numbers 52, 72, 33 and 55, for example.

Well, it’s very possible that Bishop Sycamore should not be on the field with high schoolers.

A few of the players, who are largely untraceable, may have graduated from high school already, or might be much older than they say they are.

One of those players is quarterback Jailen Knight. He was originally listed as a Class of 2021 recruit and should be a freshman in college. Now he claims to be a Class of 2022 recruit.

Reply to @yourway_too.bad many more guys I can cover, lmk if i should keep going #Bishopsycamore

Another questionable Bishop Sycamore player is wide receiver Jeremy Naborne. He was also part of the Class of 2021.

Reply to @jacksonslater1 here’s another for yall! might keep it going if y’all like it, if not tell me what else to cover. #bishopsycamore

And then there’s cornerback Adrian Brown. He got dusted in the game against IMG and is lying about his age. Brown might be at least 20 years old.

Reply to @adamjthelawyer here’s another that might be 20 years old at the youngest…let me know what else y’all wanna see. #bishopsycamore

The entire saga is truly unfathomable, and how this seemingly fake high school full of players that are lying about their age went unchecked is baffling.