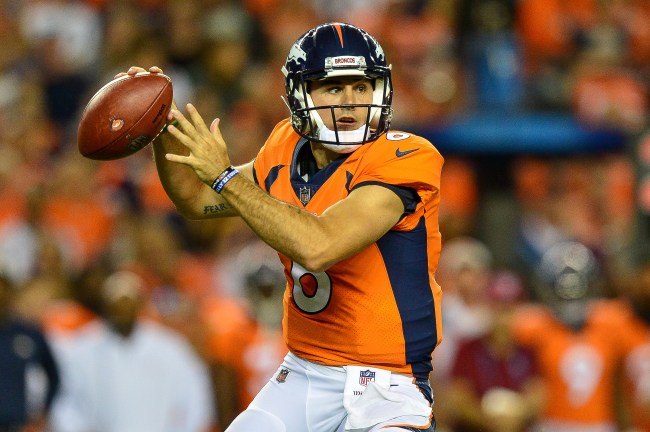 Last October on Halloween former Broncos QB Chad Kelly was arrested when he drunkenly stumbled into someone’s home after attending a party hosted by Von Miller.

According to an arrest affidavit, one of the homeowners, a woman, was sitting on a couch just inside the front door while holding her young child when Kelly entered uninvited and sat down next to her, mumbling incoherently.

Officers began to search the area after reviewing security video of the front of the house that showed a man wearing dark pants, a white long-sleeve shirt with a brown vest and a red scarf around his neck.

His clothing appeared to be disheveled, police said.

A man matching the description was found inside a black SUV in front of the Gothic Theatre on South Broadway not far from the residence.

The man was detained without incident and he identified himself to officers as Kelly.

The male homeowner was brought to the Gothic Theatre where he positively identified Kelly as the man who entered the residence uninvited.

This afternoon TMZ released the video of Kelly being chased out by the man wielding a vacuum cleaner and it’s as bizarre as it sounds.

Here’s VIDEO of ex-Denver Broncos QB Chad Kelly being chased out of a Denver-area home by a man wielding a vacuum cleaner tube … all while Kelly’s dressed like an idiot in his Halloween costume.

TMZ got the video of Chad Kelly getting chased out of the house with a vacuum tube… pic.twitter.com/kC3zCZ4Jk9

Chad Kelly was eventually released by the Broncos and has since plead guilty to trespassing charges.

Kelly was sentenced to one year of supervised probation and 50 hours of community service during a brief hearing with little fanfare. The judge allowed for probation to be transferred to Kelly’s home state of New York or in another state where he lives, as approved by the probation department.