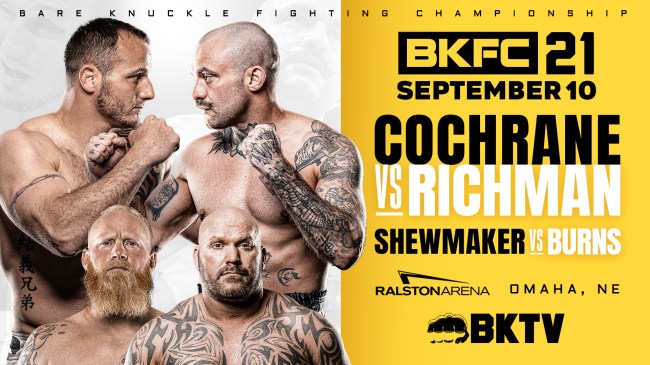 It’s a great time to be a sports fan with so many athletic events happening across the world. But if you’re looking for some hard-hitting action that’s on a different level, look no further than BKFC 221 which is streaming Friday, September 10th from Omaha, Nebraska.

What’s so exciting about BKFC 21? If you missed BKFC 20, featuring a bout for the vacant Bantamweight World Title, it’s some of the most intense fighting in the world. It’s the only sanctioned bare-knuckle fighting organization out there.

This fight is headlined by a light heavyweight clash between Dakota Cochrane (33-13, 3-0 BKFC) and Mike Richman (18-8, 2-0 BKFC), with possible title implications on the line. And co-featured is a heavyweight bout between Sam Shewmaker and Josh Burns.

How to watch the BKFC 21 live stream

Once again, BARE KNUCKLE TV is now the only way to watch the Bare Knuckle Fighting Championship in the United States. And just for $4.99/month, you can watch the BKFC 21 stream and more BKFC exclusive content. The fights start Friday at 8 PM ET/ 5 PM PT.

Bare Knuckle Fighting Championship (BKFC) is the first legally sanctioned and regulated bare knuckle event in the U.S. since 1889, so, yeah, it’s as no-holds-barred as it gets. Dedicated to preserving the legacy of bare knuckle fighting, bouts are held in a revolutionary circular four-rope ring, which is purposely designed for fast-paced and exciting fights. Moreover, each bout begins as fighters “Toe the Line” — which means starting every round face-to-face and just inches apart — the intensity is as high tense as it gets.

Fighters in BKFC are established pros from sports like boxing, MMA, kickboxing and Muay Thai, and are the only athletes able to compete. Additionally, each competitor is only allowed to wrap their hands within one-inch of the knuckle, so fights are as bare-knuckle as it gets.

An Omaha hometown hero, Dakota Cochrane looks to continue his undefeated run in the BKFC for the light heavyweight title. In the other corner, Mike Richman looks continue his TKO streak after besting Marcel Stamps at BKFC 17. Also, keep your eye on UFC veteran Houston Alexander making his BKFC debut against Wes Combs.

How Much Does BKFC 21 Cost?

With the live stream only available on BARE KNUCKLE TV, there’s nowhere else to catch the hard-hitting, intense action.

The sports calendar is filling up, so you’ll want to make sure you don’t miss the last, wildest event of the summer, BKFC 21, which delivers the hardest hitting action. So make sure you subscribe to BARE KNUCKLE TV and get the BKFC 21 live stream up now.