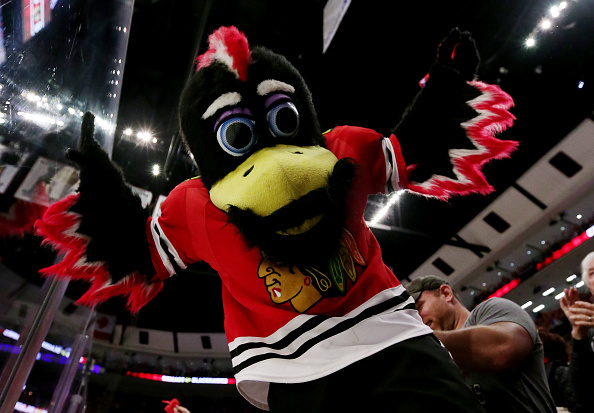 On Friday night, Blackhawks mascot ‘Tommy Hawk’ was involved in a scuffle with a fan which was depicted in a now viral video. According to police, the fan started punching the mascot in he face before getting slammed to the ground.

Via The Chicago Sun Times

Chicago police confirmed they were notified of a disturbance at the United Center around 11:15 p.m. Friday. Police said a “male was performing as a team mascot” when another man began punching him in the face and put him in a headlock.

But the police narrative doesn’t necessarily match the scene caught on video, which was widely circulated online.

In a series of Snapchat videos which were shared on Twitter, Tommy Hawk is seen pushing the man and landing a few jabs of his own.

“Watch out for the kid,” the man says as the Hawks mascot picks him up and slams him onto the ground.

Once the man is on the floor, the Hawks mascot leans over him and throws several punches, with the man appearing to fight back to some degree. In the final segment of the video, Tommy Hawk pushes the man away from him.

Here’s the video of the incident.

Apparently the guy tried to take the mascot’s head off. A lot of mascots are in wicked shape and can kick your ass. https://t.co/rj8dKXietn

The Blackhawks are currently investigating the matter.

A Hawks spokesman said team officials were aware of the incident and looking into it on Saturday.

“We are gathering the facts and will have no further comment at this time, pending our investigation,” he said.