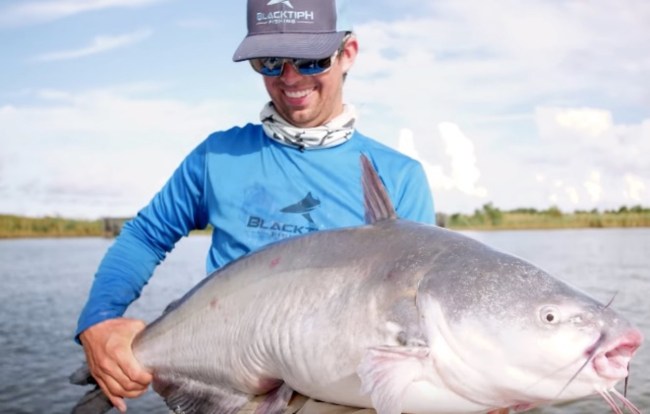 I’ll admit that when it comes to fishing, freshwater and/or saltwater, fishing for catfish is one of the areas I know the least about. I grew up in Florida and spent my Summers in upstate New York’s Adirondack mountains, fishing year-round in Florida for species like Snook, Redfish, Kingfish, and Tarpon and in the mountains we’d typically go after Smallmouth Bass and Brook Trout.

We’ll often catch ‘Sailcats’ on accident or saltwater catfish when dropping baits on the bottom of a channel for other fish. You’d call them ‘trash fish’ in these situations. But I’ve never fished on the Mississippi River for catfish and that’s something I need to get on in the near future after seeing this clip.

Joshua Jorgensen from BlacktipH fishing (YouTube Channel Here) went out with his friend Capt. Blake in pursuit of GIANT Catfish on the Mississippi and that’s exactly what they caught. For bait, they used the carcass of a giant Yellowfin Tuna as well as Wahoo, Cobia, and Mahi-Mahi.

It seems a little odd to me to use these pelagic saltwater fish as bait for a large freshwater species but like I said before, I pretty much know jackshit about what it takes to catch giant catfish. Here they are hauling in some MASSIVE Mississippi River catfish and I’ve got a bonus video below you’re going to like:

That clip above reminded me of this one that popped up in my YouTube feed a few days ago. This little girl reels in a 30-pound catfish using one of those cheapass throw-away Frozen-themed rods you’d see at WalMart in the kid’s section that’s built for kids to catch little goldfish from the pond, not 30-pound catfish.

I can’t wait until my son’s old enough to start taking him fishing. What’s the point of me living in Florida in this unbearably hot year-round weather if I’m not going to take advantage of living in the literal fishing capital of the world?