Blake Bortles Throws Shade At The Jaguars’ Coaching Staff; Expects To Be A Starting QB Again 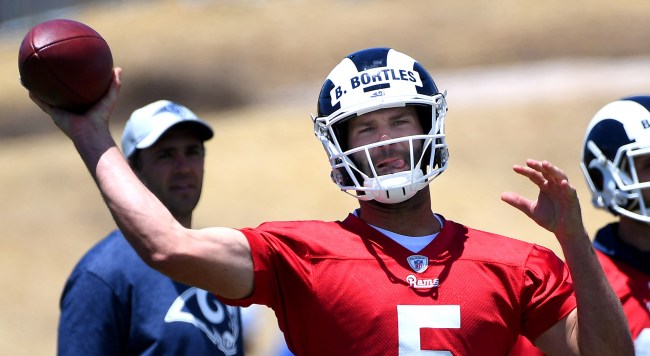 After a underwhelming five seasons as the starting quarterback for the Jacksonville Jaguars, Blake Bortles now finds himself in the role of clipboard holder for the Los Angeles Rams.

Bortles, the Jaguars’ first round pick (third overall) in the 2014 NFL Draft, was released by the Jaguars after the 2018 NFL season, just one year into a $54 million contract extension. After finding no takers willing to make him a starting QB, he ended up signing a one-year, $1 million contract with the Rams to be Jared Goff’s backup for the 2019 season.

Now, getting his first taste of how the Rams operate during OTAs, Bortles says the experience is unlike anything he experienced while playing for the Jaguars.

“Seeing how [head coach Sean McVay] coaches, how all the other coaches coach and how the guys are receptive and take it, I’ve never seen anything like it,” Bortles told the Los Angeles Times.

McVay and Goff also seem pretty happy to have Bortles in Rams camp.

“You’ve seen a lot of really good things that he’s put on tape over the course of his career in Jacksonville,” said McVay. “And, if need be, we’re confident he’ll perform well for us as well.”

“I’m excited to have him in the room with me,” added Goff.

“There’s no ‘Should I say this? Should I not say this?'” Bortles said of his relationship with Goff. “We’re both pretty free talking with each other.”

After being released by the Jaguars when they signed Eagles quarterback Nick Foles and moving to the Rams to be Goff’s backup, Bortles has a pretty good idea of what to expect of his role for the coming season.

“It’s a weird thing to kind of balance in your head. I have a role. I’m here to back Jared and do whatever I can to help him out. And if I get an opportunity, I’ve got to make sure we don’t miss a beat offensively and we continue to roll,” Bortles said about the new situation. “And at the same time, I also expect to be a starter in this league again, and I know it’s not going to be here in L.A. So I’m trying to just better myself. … And if I get an opportunity to play, great. If not, then I spent a year learning from McVay, and being around a really good organization.”

Don’t feel too bad for him if it turns out that he doesn’t get to play much next season. $26.5 million of that contract extension he signed with Jacksonville a year ago was guaranteed, and they still owe him a cool $6.5 million for the 2019 season. Something tells me he’ll be just fine.