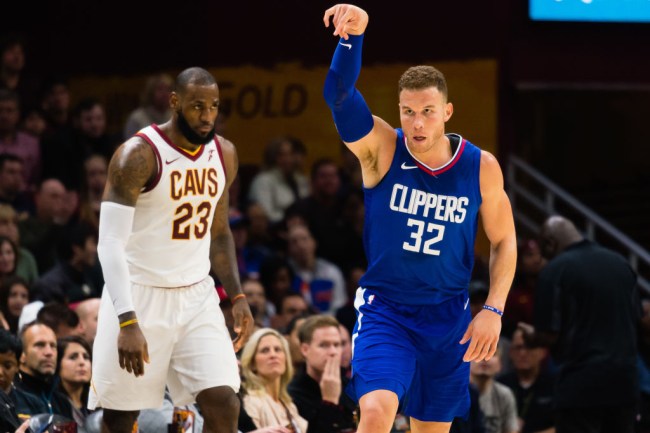 Blake Griffin has himself some good ol’ fashioned baby mama drama. According to TMZ, Griffin’s former fiance, Brynn Cameron, who has two kids with the NBA star, claims Blake left her for Kendall Jenner the same week the two were supposed to get married after she refused to sign a prenup.

her lawsuit, obtained by TMZ Sports, Brynn claims the NBA star made an oral agreement with her back in 2013 that she would quit her job to raise their kids so he could focus on getting a max NBA contract, worth more than $170 mil.

In exchange, Brynn says Griffin “promised explicitly that, whatever the future might hold, he would take care of [Cameron] financially and provide her a home for the rest of her life.”

Brynn says she and Blake were slated to tie the knot in St. Barth’s on July 28, 2017 — but one month before the wedding, he demanded she sign a prenup.

Brynn shut him down — claiming the prenup contradicted the oral agreement they made in 2013.

Blake then called off the wedding 1 week before the date — and Blake sent a note to guests saying, “Brynn and I take this commitment to each other seriously and want to ensure it is done in the right way.”

Instead, Brynn says … Blake “immediately embarked on a high-profile affair with [Kendall Jenner]. The next weekend, on what would have been his wedding day, he was partying in Vegas.”

In her suit, Brynn says she would council Blake on how to deal with the “mounting tension with Chris Paul.”

“The Clippers had been Griffin’s team since he was drafted and he felt like it was no longer his team.”

She continued, “Griffin struggled to be viewed as a leader for the Clippers while Chris Paul was such a vocal presence in the locker room and the media — and was better known for his drive to win and dedication to both team building and family values.”

Brynn says she counseled Griffin to lead in his own way “by setting a standard for hard work.”

She also claims she helped Blake with his communication skills — including how to speak with teammates and coaches when issues would arise.

“The relationship between Griffin and other teammates had become so toxic Rivers had to mediate disputes in private meetings with the players.”

“Griffin did not know how to handle confrontations and would go silent when things did not go his way. To change that dynamic, Cameron would coach Griffin on how to communicate his issues.”

These players need to get their potential girlfriends to sign NDAs even before they start dating.